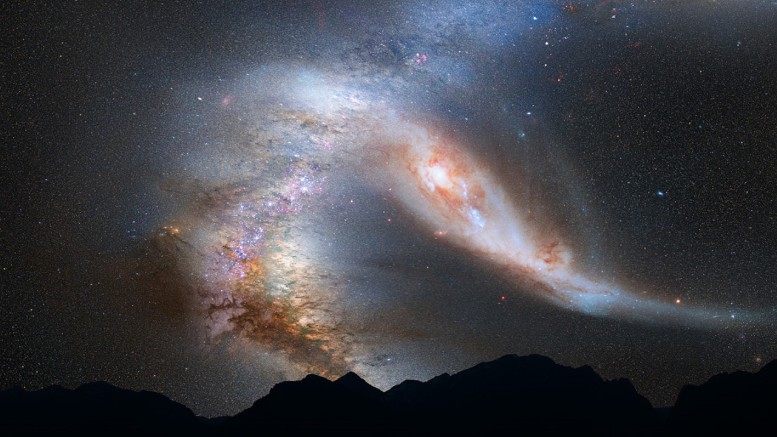 As something taken out of a sci-fi film, the collision of two black holes was recorded by the Laser Interferometer Gravity-Wave Observatory (LIGO) in the form of gravitational waves. These waves, theorized by Albert Einstein a century ago but never proven to be real, are now changing the way we look at the universe.

The waves were recorded on Sep. 14, 2015 at 5:51 a.m. Eastern Daylight Time, and were detected by twin LIGO detectors, one located in Livingston, LA, and the other in Hanford, WA.

The waves, detected in the form of sound [listen to the sound below] by LIGO, are prove of “a universe in which space and time are interwoven and dynamic, able to stretch, shrink and jiggle,” as the New York Times puts it.

The existence of such waves is definite prove not only of Einstein’s theory in gravitational waves but also of the existence of black holes, as these were the cause of the cataclysm that created these waves.

Based on the calculations, the collision took place 1.3 billion years ago and it consisted of two massive black holes, one 29 and the other 36 times the size of our sun, spiraling around each other until the gravitational force of both was strong enough to make them collide; all in all, a collision of two titans.

The technology used to detect the waves is also not complicated to understand, but difficult to come around. The detectors consist of an amalgamation of lasers, mirrors, and a high-tech detector, all of them arranged in tubes that expand on a length of 2.5 miles in an L-formation. For further information on how these detectors work, check out NPR‘s article.

And maybe, in a few more centuries, the human race will be able to harvest the energy of gravitational wave, allowing for space-time travel. But only time, and maybe space, will tell.

For more videos and pictures, you can follow this link. For more information about LIGO, you can visit their site here.

McDaniel students and faculty raise concerns about parking on campus