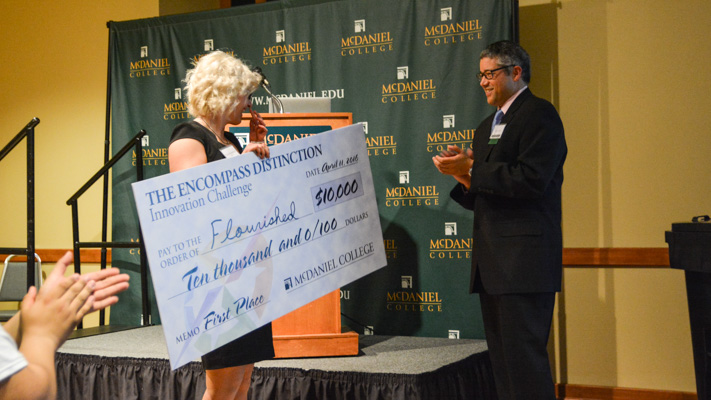 The event commenced with talk from Jason Stambaugh, class of 2007. A former political science major, he has taken advantage of the versatility of his liberal arts degree, starting a variety of local businesses. With the launch of the Encompass Distinction, he was contracted to be the school’s Entrepreneur in Residence. 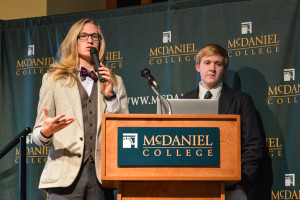 In total, McDaniel’s first Innovation Challenge received just over 20 submissions, with a few involving group collaboration. These were then narrowed down to a final five in the first round of judging. The top five were called upon to compete in this event. Finalists were judged by Steve Chapin, Jr., Steve Moore, and Deborah Dale Seidel ‘84—all local entrepreneurs and/or workers in finance and business.

Finalists had five minutes to present their products/services in front of an audience of students, faculty, staff, and, of course, the judges themselves. They were to assure the demand and feasibility of their ideas within this time. After this, the judges questioned the presenters on their ideas to further gather information on these ideas.

The finalists had a variety of ideas and levels of previous entrepreneurship. These included the following: 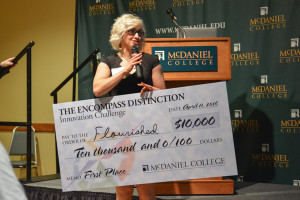 Judges then left to debate the final placing. The unique situation in this round of judging was the rapidity—the results came not too long after the presentations.

In the end, the grand prize of $10,000 was awarded to senior Nicole Rutherford to go towards “Flourished.” The second prize of $5,500 went to junior Ryan Lutes for “Ryan Lutes, LLC,” and the third prize of $2,500 went to sophomore Tyler Van Dyke and junior Jeb Shingler—a total of $18,000 in prizes.

Campus Announcements Gets a New Look