Jonathan Slade, the chair of the communication and cinema department, six-time Emmy award winner, and McDaniel alumnus, is a man you want to get to know.

Slade grew up here in Westminster. He attended Carroll County schools from elementary all the way up to McDaniel, then called Western Maryland College, where he graduated in 1988. “I am known as more of a ‘county’ rather than a ‘townie’ since I lived outside of town on a farm,” Slade says of his Carroll County upbringing.

Soon after graduation, Slade began his career at Maryland Public TV (MPT). However his acceptance letter from the University of Southern California would come a mere three weeks later. He quickly packed up his bags, said his goodbyes, and began his next journey.

While at USC, Slade earned his master’s degree in cinematic arts at the School of Cinematic Arts. He also snagged an internship at Paramount on the “Star Trek: Deep Space Nine” set and worked as a production assistant on the show “Doogie Howser, M.D.”

Every summer, though, he came home to Maryland to continue working for MPT. “They had thrown me this huge goodbye party when I originally left for USC, but then once they realized I was going to keep coming back the parties sadly stopped,” Slade says. 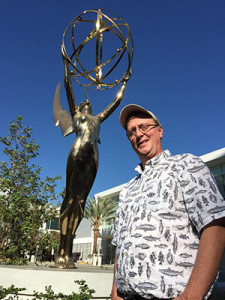 Slade at the TV Academy in Los Angeles in early November 2016. Photo courtesy of Jonathan Slade.

Slade began his full-time work for MPT as a producer in 1991 and stayed until 2003. From 1995 to 2003, Slade also worked nights at McDaniel College as an adjunct professor. In the fall of 2003, Slade was offered a full time position as a tenure track professor and he accepted.

He says, “I could have stayed [at MPT], but I wanted to find a new challenge. I wanted to share what I knew about cinema with students.”

After so many years of being away from McDaniel, it might feel strange coming back, but for Slade it was not. “I was a huge nerd during college,” he says. “All of my best friends were professors. When I came back, some of the professors that once taught me were still here, so I was surrounded by people I had immense respect for.”

Slade, in addition to his work at MPT and McDaniel, has won six Emmys. Four of them are for children’s shows that he helped edit and produce. Among these are “Vid Kid Children’s Specials,” shows about the environment, space travel, fables, and a trip to the National Aquarium. His other Emmys are for his documentaries: “Electric Road Trip: and “Eatin’ Crabs Chesapeake Style.”

Now, Slade is working on a new documentary, “Barns of the Susquehanna Valley,” which will air later this year in December. The documentary will focus on the agricultural, architectural and historical significance of the iconic structures. Slade says, “I’ve spent over a year and a half traveling to interview and speak with barn enthusiasts. They are real!”

Now you’ve got to be convinced—Professor Slade is a man you want to get to know.