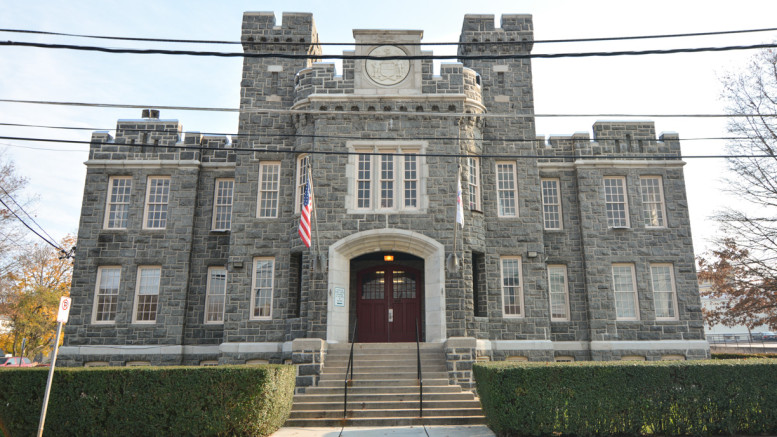 Completed in 1918, the façade of the Longwell Armory resembles a medieval fortress. Photo by Kyle Parks.

A mysterious castle-like structure sits at 11 Longwell Ave. in Westminster. Visitors will find what appears to be a medieval fortress bearing the seal of the State of Maryland at the top center of its façade. This is the Longwell Armory, a building with a long history in the Westminster community, which now houses the Westminster Recreation & Parks Department offices as well as a Family Fitness Center.

According to Suzanne Moore of the Maryland Historical Trust, this 19,566 square foot armory was designed by J. Ben Brown of Cambridge, MA, and completed in 1918 for a cost of $50,000. It was originally built to house Company H, First Maryland Infantry, comprised of Carroll County soldiers.

Daniel Pyle, the Real Property Manager for the Maryland Military Department, says that the armory’s construction was part of the transition process of the American militia becoming the National Guard as we know it today. He states, “at [that] point, the term ‘militia’ had officially evolved into the ‘national guard.’ They were building armories – houses for these National Guard units.” 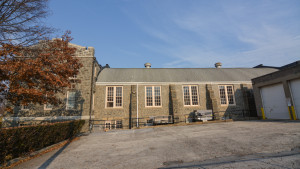 A side view of the armory. Behind the front structure is a gymnasium, with other fitness rooms (formerly the Westminster City Police) in the basement. Photo by Kyle Parks.

Throughout its history, the armory has served as a gathering place for the military and community alike. Pyle notes that the armories “were also used as social points for the communities. They would have plays, they’d have dances there; they were set up as movie theaters if the local town didn’t have a movie theater.”

Over the years, says Moore, community events such as “the annual Kiwanis Club antiques show, performances of the Municipal Band and annual community Christmas celebrations” have taken place at the armory.

Jay Graybeal of the Historical Society of Carroll County elaborates on the military uses of the building, stating that in 1932, “21 local veterans of the Great War met at the Westminster Armory to form a 29th division Association Post.” Pyle adds to this, saying that before the Vietnam war, “every Wednesday night… the local national guardsmen would go to their armories… and they would practice their drill ceremonies.” At these times, soldiers would be moved and marched, and planning for annual encampments would be made.

A notable shift in the building’s history took place in 1980 upon the completion of a new armory on Hahn Road, with the unit being transferred to this new location. Regarding this change, Pyle states that the old armory was declared “excess.” In this state, the building first fell under the jurisdiction of Carroll County. In the end, as reported by Donna E. Boller of the Baltimore Sun, the City of Westminster signed an agreement to lease the building for $1 per year until 2005, then proceeded to rename the building as the “Longwell Municipal Center.” 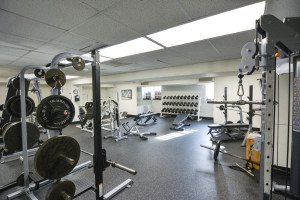 Much of the former armory’s structure houses a family fitness center. Pictured is a weight room in the basement. Photo by Kyle Parks.

In late 1992, however, the city began planning to buy the building, as it wanted to finance renovation; however, the city council was reluctant to invest in a building not owned by the city. At that time, the former armory housed The Westminster City Police and recreation programs offices.

On Sept. 2, 1993, Boller reported that, after 16 months of negotiations, the city worked the building’s price down to $1, on the condition that it would finance renovations while preserving the armory’s historic façade. $347,000 was set aside for these renovations, which would remove asbestos and old oil tanks from the building, convert former police offices into city finances offices, make the building accessible to wheelchairs, and expand recreation space.

Today, the Family Fitness Center, comprising much of the structure, provides an exceptional, affordable gym space for the community. The building, being within the confines of the Westminster Historic District, has been entered into the National Register of Historic Places and will continue to serve as a center for the community in the years to come.