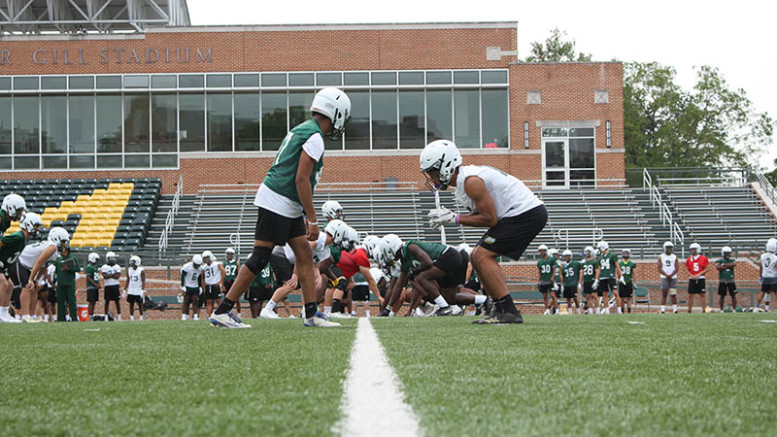 Football will kick off its season opener at home on Saturday, Sept. 7, against non-conference opponent Misericordia.

This opening match marks a renewed beginning for the team, following various coaching changes during the off-season. In addition to new coordinators joining the coaching staff, the College announced former football defensive coordinator Demarcus White as head coach last semester. This season opener will be White’s first game acting as head coach for the Green Terror.

“We are preparing for a four-quarter fight,” White said. “For us, the focus is the things we preach every single day: taking care of all the small details, making sure we execute every single play, and, most importantly, playing fast through technique.”

Since taking the reins of the program in March, White has inspired players with his leadership and discipline.

“It has been great, we are super excited for this year,” sophomore linebacker Tyler Berghaier said. “Last year I think we had a few missing parts, but I really do think this year that everything has come full circle and we will shock [the Centennial] Conference.”

Under White’s leadership, the team has prided itself on adopting a new culture rooted in toughness, decision making, and recognizing the magnitude of the opportunities ahead.

“The guys had a great [off-season] and worked extremely hard,” White said. “This is the big time and that is how we feel about McDaniel College and embracing our culture.”

These cultural changes are also accompanied by coaching changes to the program. White will be joined by two newly announced coordinators: Scott Browning and Derrick Johnson. The program also sees the addition of two graduate assistants with 2019 alumnus Paul Flag stepping into a coaching role, as well as Alex Kuyinu joining the program for the first time.

Changes to the program have been widely accepted by the team with a sense of optimism.

“Overall, I think we are taking steps in the right direction,” sophomore punter Andy Witten said. “Since the beginning, it meant business right away.”

Athletics on the Hill often evoke a sense of excitement in the McDaniel community and this rings true once again.

“There is a huge vibe on campus for all of our sports teams, but specifically for football everyone is pretty eager to see what’s new,” White said. “We are trying to build off our foundation and history to have the ball bounce our way a little bit more.”

Overall, the program looks to reflect the values of the McDaniel community in its success.

“All of our students work extremely hard, it is toughness first and we have to earn everything,” White said. “That is our school’s philosophy and we are the Green Terror, we are all in this together, so let’s embrace it.”

Deans hold first ‘Ask McDaniel Anything’ forum of the semester