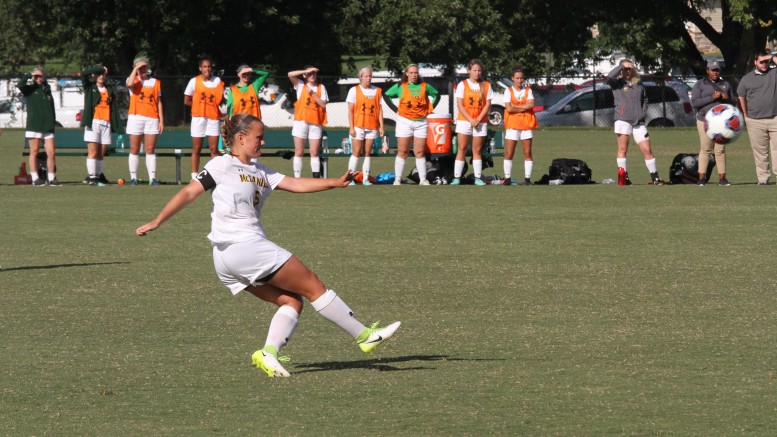 Captain Abby Keen found the back of the net first for McDaniel (8-2, 4-0), firing a shot from up top in the 17th minute.

“We had talked before the game about how distance shots could be a factor here and they had a pretty small goalie so I saw that I was wide open and Katie Clawson made a nice pass to me and I took a touch and hit it over the goalie,” Keen said.

Washington (6-4, 1-3) earned their lone point on a Arianna Sabatino goal in the 61st minute.

Fresh off her first goal of the season, Keen found Katie Kirschenmann down field who turned the ball into a 42:44 goal to close out the first half.

“This is exactly what we wanted,” said head coach Sandy Lagana. “Wining this game was the most important thing, but it was nice to win in a big way.”

“I was having a little bit of trouble finding a slot,” said Farrell, “and my coach comes up to me and says, ‘Lindsey, you’ve got it. Keep you’re head up. You’re going to find it.'”

The junior now has two goals and one assist in nine starts this season.

“I tried my hardest to get in front and I got a good touch and got around the goalie. I was happy to put it away for my team,” said Farrell.

Minutes after the Engle-Farrell transaction, Keen put forward a second assist to Allie Titus for her second goal of the season.

“We had all types of goals,” said Keen, “corner kicks, distance shots, slots and crosses. We can score any way and we can keep teams off the board. I feel pretty confident about doing well.”

Sabatino found the back of the net to draw the score to 4-1 in favor of the hosts.

McDaniel wasn’t done, however, as a Paola Rosa goal crossed the line with ten minutes to play off a Titus assist.

“A lot of kids scored and we scored in a lot of ways. I’m really pleased,” said Lagana.

McDaniel is playing two starters down with goalie Sarah McDonald and three-goal-scorer Kirsten Gibson out with injuries.

“We’re dealing with it just like we would any year,” Lagana said regarding the team’s roster options.

Freshman Sydney Kelly warded off eight Washington shots with one save in her second start in goal for McDaniel.

“After last week I definitely think 5-1 is a huge win for us and I’m really excited,” said Farrell. “We’ve been playing well as a team, putting balls in the back of the net, it’s the best part of my day.”

“If you look at the stats,” said Lagana, “it wasn’t like they held us. We beat ourselves.”

“[Franklin & Marshall] gets better every single year so we know it’s not gong to feel like a Goucher game or a Washington game,” said Lagana. “It’s really about focusing on us and focusing on the ball and defending as 11.”