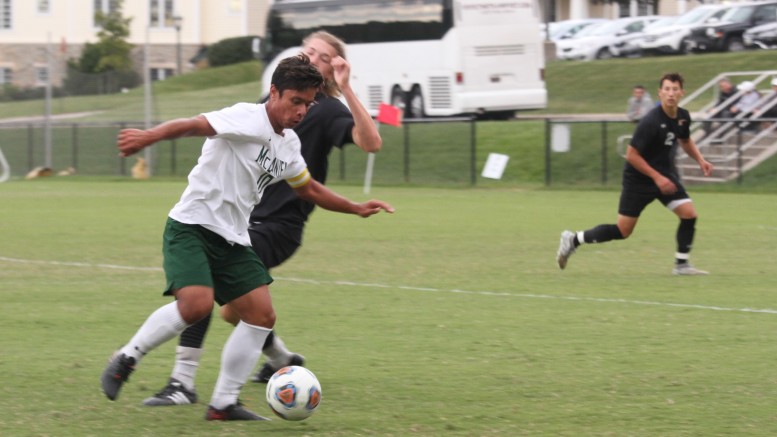 Captain Raul Escobar netted his seventh goal of the season in the 72nd minute for the lone score of the game.

Escobar and teammate Nick Bowman each had three shots for McDaniel (6-2-1, 2-2).

“Like any conference win,” said head coach Steve Corrieri, “you’ve got to earn it and I thought the boys worked their socks off. When you worked hard it’s surprising how you get thing like that. If you’re not prepared to do the hard line, the hard work and the hard running, then you’ll get nothing.”

McDaniel’s Nick Over held his own in goal for the duration of the game, saving all four of Washington’s shots on goal.

“I thought we deserved it. I thought it was close like all conference games,” said Corrieri. “We played well and made the play at the end. It was a lot of nothingness out there. Lots of hard work and physicality and passion and a little bit of quality is needed sometimes.”

Four players earned yellow cards in the rough, physical match. Each team was called for a total of 13 fouls, most in the second half.

After starting off the season 5-0, McDaniel dropped its last two games, sandwiching a 0-0 tie at Goucher.

“After coming off back-to-back losses, conference game at home, we’re all pretty pumped,” said Escobar. “Coming back with a big win is huge. We’re on the right path again.”

McDaniel returns to action Wednesday at Washington Adventist (4-4) at 5 p.m.