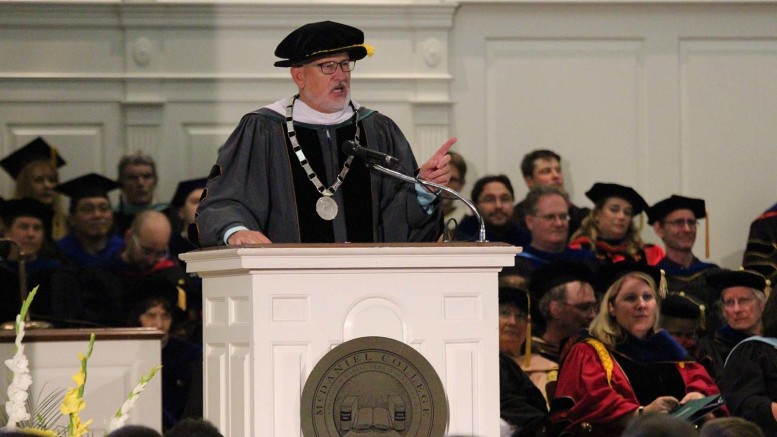 On Saturday, Feb. 23, the review of McDaniel’s academic programs reached its conclusion at a meeting of the Board of Trustees.

President Casey sent an email to the College community that evening announcing the suspension of art history, religious studies, French, German, and music majors, all changes that the Board approved.

Minors in music and German, as well as the deaf studies graduate program, have also been suspended.

Though both the music major and minor are suspended, music performance programs will still be a part of the college’s future.

“In music we’re retaining a lot of the performance-based aspects,” said Casey. “At the end of the day, the only thing that disappears is German and Latin and deaf studies at the graduate level.”

These suspensions come after a process that started in May of 2018. During the summer, the newly-formed Strategic Thinking Group for Pedagogical Value, which consisted of faculty members from across various departments, developed the guidelines for the review process. The Board vote terminated the STGPV process.

The group put together data sets and developed questions for departmental self-assessment in order to review the College’s academic programs.

Part of the data the STGPV used represented student behavior that covered a 10-year period.

“We also have what’s called pipeline data,” said Casey. This is data that shows student interest trends from prospective to current students.

Out of its annual pool of admitted students, McDaniel generally sees a 17 percent yield for interest in its programs.

For the Class of 2023, for instance, two admitted students reported interest in the German program, which would, following data trends, translate to between zero and one first-year students interested in German in the fall of 2019.

“We did not see similar pipelines in German [to other more populated programs], unfortunately,” said Casey.

Reinvestments, of $1 million per year, will likely be made in four key areas identified by the College and national ratings to be of growing interest to future students: health sciences, business and technology, liberal arts core curriculum, and professional certificate programs. Faculty have been asked to put together proposals in these four areas to present to the Board of Trustees at their May meeting.

The suspensions allow for such reinvestments to take place in lieu of a tuition increase, said Casey.

“Some of the programs came back and said ‘this is how we’ll retool,’” said Casey.

This 30-day period follows guidelines set out by the American Association of University Professors. The president and provost were unable to comment during this period.

AAUP guidelines also inform how colleges should go about assessing programs and what happens with faculty in affected programs. According to Casey, these guidelines allow for programs to be eliminated for either financial issues or educational consideration reasons. This process falls under the latter category.

“This is not a budget cut,” said Casey, “it’s a budget reconsideration.”

Faculty in affected programs have different pathways for support from the College, though ultimately jobs will be lost.

“It’s different in each major because of the teach-out plan,” said Casey. “There is no one particular model.”

While no one will be asked to leave their post at the end of this spring semester, some will be losing their positions earlier than others, depending on how many faculty members it takes to allow current students to finish their program.

“The College is going to provide support for [affected faculty] who are going on the job market,” Casey said. “We’re going to be as humane as possible.”

Faculty were first informed of the process at the end of last academic year in May and again in Casey’s state of the College address to the faculty in August.

The perceived hastiness of the process can be explained by the goal of the review. Rather than look at different departments on a rolling basis — an always ongoing process –, the College examined every department and program in one condensed 8-month period.

Many students and alumni have expressed frustration over a lack of transparency, mainly on social media.

“I think we have some cultural differences between a couple of words,” said Casey. “There’s a critical need for confidentiality when it comes to [decisions like these].”

According to Casey, most of the data used in this process falls under FERPA — federal laws that control access to educational records and information –making it hard to be as forthcoming as some community members may want.

“I can’t imagine a process in which students would be sitting at a table looking at that data,” Casey said.

Because of the sensitivity of the data, only College administrators, faculty, and the Board were privy to the data involved in the process.

On Wednesday, Feb. 20, Casey posted a status on his Facebook page with the intent to dispel misinformation about the academic changes.

“Truth is really important to me,” he said. “There were so many faults, things being said. I probably made a foolish mistake,” said Casey of posting the lengthy status that urged his Facebook friends and followers to disregard unconfirmed information spread on social media.

Casey said his hopes were to have a reasoned conversation with his followers — mostly students and alumni — about the academic reviews, but was surprised when many of the comments on his status were charged and accusatory.

These interactions contributed to a change in Casey’s outlook on using social media to communicate with the McDaniel community. Despite several well-thought out responses and questions from other Facebook users, he said, he no longer believes social media is a viable platform for serious discussion.

“I think we’re not in that era anymore,” Casey said.

Some students and alumni on Facebook called for Casey to step down as president of the College. With such significant changes to the school’s programs, he said he realizes that he is the figure that people associate with the academic review process.

“It’s my responsibility to be the face of that,” he said.

In spite of the backlash to his post, however, he said some good did come from the experience.

“I deeply appreciated all that I learned and exchanged,” he said.

Casey’s removal from office is unlikely, as he has full support from the Board of Trustees.

A group of students and alumni protested outside the Feb. 23 Board meeting in an attempt to read and distribute testimony to Board members.

“A group of students had already contacted me and stated publicly that they had no reason to believe that the information they sent me was being delivered to the Board,” said Casey. “This isn’t true, it all went to the Board.”

According to Casey, the Board had no interest in testimony.

“In my nine years, I’ve never heard of a group addressing the Board,” he said.

Being a private college, all Board meetings and their contents are private. Three alumni, three faculty, and three students act as visitors to the Board and, in unusual fashion, were present for Saturday’s vote.

Casey instructed Campus Safety officers, who were guarding the door to McDaniel Lounge where the meeting took place, to keep the peace. At one point, noise issues resulted in officers pushing the protesters further back from the door.

When students began filming the meeting from the window, Campus Safety put up a black cloth to block the view. Casey explained that salaries and college costs were being discussed.

The Board’s decision has garnered national attention since it went public Saturday night. One specific petition, titled “Open Letter in Support of Faculty in Art History, Religious Studies, French, German, Music, Latin, and Deaf Education at McDaniel College,” had 826 signatures the morning of Tuesday, Feb. 26, ranging from high school students to alumni to professors at McDaniel and other institutions.

Casey would rather people look toward the future than the past, however.

“I wish the people who like to turn back the clock had an idea about what the real issue here is, which is the fact that institutions like ours have fewer resources,” he said. “I haven’t seen a solution. I’m looking for someone who actually has an idea about this.”

He noted that in all his recent time spent on social media, he made sure to keep an eye out for solutions to the underlying issues.

“No one is in disagreement that excellent teaching, life-changing teaching, has occurred in these programs,” he said.