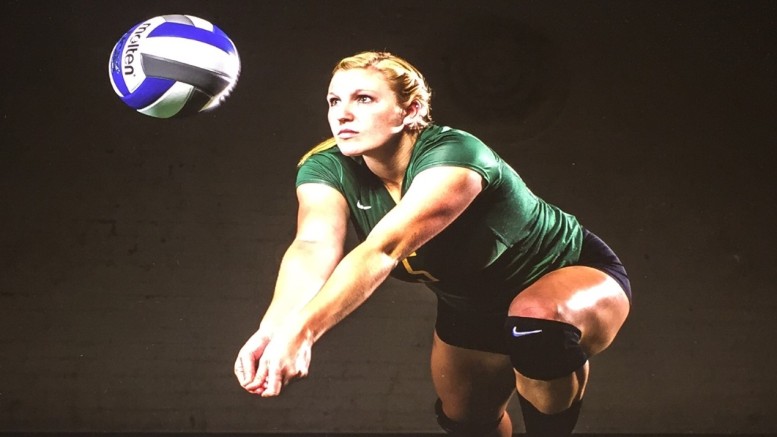 What are your major(s) and minor(s)?

I had two internships. I was a client service coordinator at this place in Owings Mills called Business Suites and I just finished an internship here in Westminster, I was a sales and marketing intern for Culinary Services Group. I also work here at school through work study in the gym.

I’m in Student-Athlete Advisory Committee for sports, so I represent my team. I always help out with Tournament of Champions and I’m involved in DIII Week.

I enjoyed it a lot. This year definitely not as much, I had a rough going with volleyball this year, and then recently as a senior I want to get out of here. I’m going to miss my friends and everything and it’s been a great four years, but now it’s just time to move on. I didn’t think it would be but after all the drama, now I’m just ready to go. After we won the championship last year, that was like the best year, and now I’m ready.

My advisor, Donald Lavin, and Coach Wolverton was definitely a good mentor.

Academically, I really struggled last year, junior year, which most people have a harder year. I really struggled in economics and dealing with volleyball. Volleyball was my priority last fall but I also had really hard classes. I ended up doing a lot better in the spring. My coach helped me out, my parents helped me out dealing with that and I just got some extra help and extra study hall and stuff. Keeping up my grades junior year was definitely difficult.

Winning the championship. That was the best feeling ever. And even though we lost first round of NCAA’s, that was amazing. They treat you like royalty, it was really cool. We got a really fancy dinner and they have all these snacks for you. It was such a cool experience.

What is your worst memory at McDaniel?

Ending this season with a losing record. I’ve never had a losing record in volleyball in my life so that was definitely hard. I had a really good high school team, we won every year. Even when we didn’t have a good year my sophomore year here, we still had a winning record overall and then this year, I don’t even know what the record was, but we had a losing record.

It definitely has helped me prioritize work and the meaning of team. It’s going to help me in the future with work and being disciplined.

Were there any times you felt as though you couldn’t continue with sports and what were they?

Probably junior year, last year when I was really struggling, especially in the spring. Volleyball too. It would be practice, workout, practice, homework and that was it and I didn’t have much of a social life at that point.

Right now I’m looking for a job, hopefully I’ll hear back soon, but I’m also looking at general business positions. I got a call from a place I’m interested in that I’m going to call tomorrow to get back to them. It’s really hard to find a job but I’ve been applying like crazy and should get an interview soon. I’m going to move home for hopefully less than two years and save up to pay off loans and then hopefully move out, maybe go to Baltimore for a little bit, we’ll see.

It flies. Everyone says that, but it really does. Every week now goes by extremely fast and it’s crazy. Definitely cherish the time you’re here. Now I’m kind of ready to leave but looking back at freshman, sophomore, even most of junior year, I’m like, ‘Where did the time go?’ Definitely cherish the friendships that you’ve made here because, I’m only friends with two people from high school and, while they’ll be my friends for the rest of my life, I’ve made way more friends here that I know I’ll be friends with for life, definitely keep in touch with them.