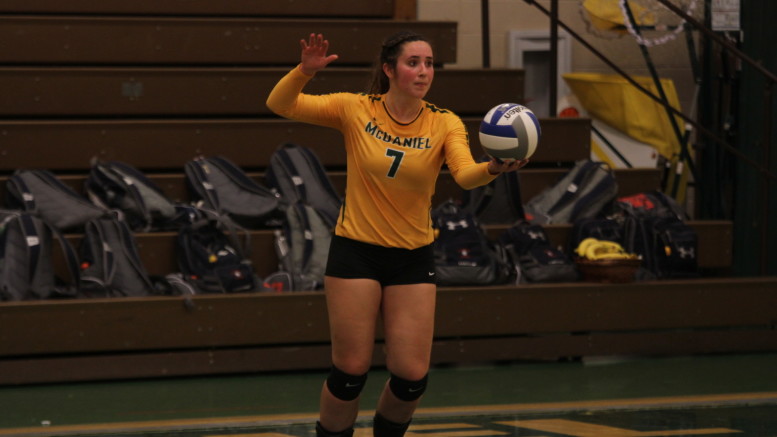 McDaniel volleyball hasn’t lost in a month. In that time they’ve captured 14 wins and risen to the top of the Centennial Conference standings.

The latest pair of wins for the Green Terror (14-1, 3-0) came Saturday at the Gill Center with a pair of sweeps against Washington College (13-5, 1-3) and Marywood (2-12) in dual conference and non-conference action.

Freshman Gayle Edelstein led the floor for the Terror with 29 assists, eight aces and nine digs over both matches.

“They’ve been a good group to work with,” said head coach Jessica Wolverton. “I think the freshman came in really ready to contribute and that’s always exciting when you see that.”

Washington built a commanding 20-14 lead over McDaniel before the Terror rebounded to draw an even 20-20. McDaniel then stretched out the run to seven points to take the lead.

With their footing found, McDaniel cruised to an easy 12-point win in the second set.

Freshman Emma Lorenzen piled on a pair of kills to kick off the 25-13 win to close out the match.

Marywood proved to be an equally tough opponent as the first set was tied 7-7 before Marlowe Embry and Lauren Wells started a 9-1 run to give McDaniel the set advantage.

Gabriella Santos led the Marywood attack with six kills while Jordan Vossler laid out seven digs for the Pacers.

McDaniel’s 14-1 September comes two years after a 18-7 regular season that won them the Centennial Conference with a final record of 21-8.

“I like to use an analogy of a volleyball game,” said Wolverton. “September is set one but you still have two more sets to win. You have to do well in October so we have to keep getting better.”

Success On and Off the Field at McDaniel College