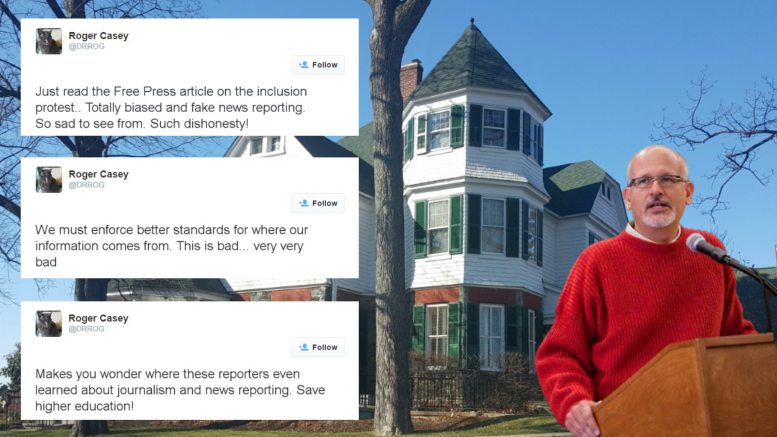 President Roger Casey of McDaniel College has declared the Free Press a publisher of fake news.

The announcement came in the wee hours of the morning last Saturday and was published on the president’s ever-so-popular Twitter account in a series of three Tweets.

“Just read the Free Press article on the inclusion protest.. Totally biased and fake news reporting. So sad to see from them. Such dishonesty!” read the first Tweet.

“We must enforce better standards for where our information comes from. This is bad… Very very bad” his second Tweet said.

The third read: “Makes you wonder where these reporters even learned about journalism and news reporting. Save higher education!”

The barrage of Tweets against his own institution’s student newspaper come as no surprise to campus officials.

“He’s never been one for censoring himself on Twitter,” one of Casey’s aids said in a closed meeting on Monday morning.

Readers of the paper weren’t surprised either, saying that with a new precedent of presidential behavior on Twitter coming from Washington it was only a matter of time before Casey got swept up in the excitement of early-morning Tweets.

Some believe the irony of Casey’s Tweets has been lost on him and wonder how he had the audacity to speak out negatively against a media outlet indirectly supported by his office.

“This man’s taken things to a new level,” one bewildered student stated.

President Casey was unavailable to respond to a request for comments on his allegations against the paper.