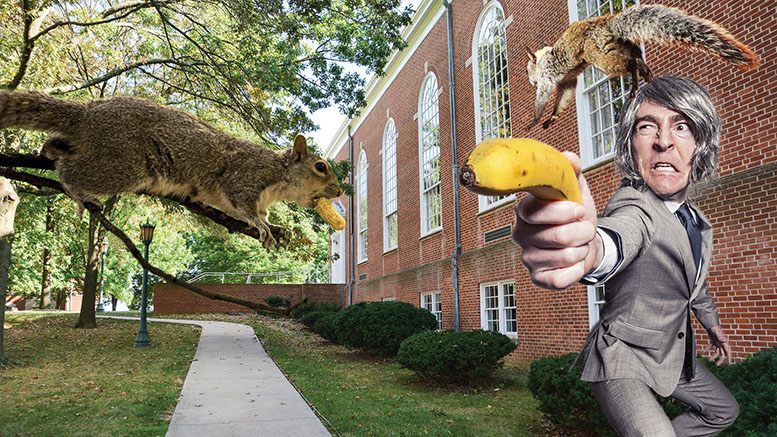 Squirrels are a common sight at McDaniel College: clandestinely rustling in the ivy patches outside of Hill Hall, sipping from the fountain in plain view of Physical Plant workers, fearlessly throwing themselves from tree branch to tree branch (and sometimes not making it all the way, which ends in a startling, desperate chirping).

Noting how much of an abundant resource McDaniel’s squirrels are, several students competing in McDaniel’s yearly Innovation Challenge devised a plan: lower the college’s utility bill by collecting squirrels and having them work to generate electricity.

“You’d just have your typical gerbil—er, squirrel, I guess—wheels and you’d be good to go,” says Harry Willoughby, senior and head of the project.

Willoughby and his team spent one long hour creating the blueprints for their setup, estimating the cost of the equipment, and rifling through their rooms for extra cash in hopes of convincing the Psychology Department to let them “squeeze [the squirrels] in with the pigeons in the basement of Merritt.”

All they needed was to catch the squirrels.

Gertrude Davis, junior, says the team was well-prepared and excited the morning they set out to capture the animals for their project. “We even practiced our squirrel calls,” she says.

But they never got their plan off the ground. After 10 minutes of running around campus, the team was exhausted and squirrel-less. Davis had gotten too close to one of the animals and was scratched on the arm; she was taken to urgent care. Willoughby, dedicated to the mission, fell from a branch after scrambling to chase a squirrel up a maple tree. What ultimately ended the quest was a Campus Safety Officer citing five separate noise complaints about the squirrel calls.

Davis and Willoughby are expected to fully recover. As of now, McDaniel will have to find other means to cut down on utility costs.

For the Beauty of the Earth: The McDaniel College Choir in Concert

The View From Here: A Photo Essay