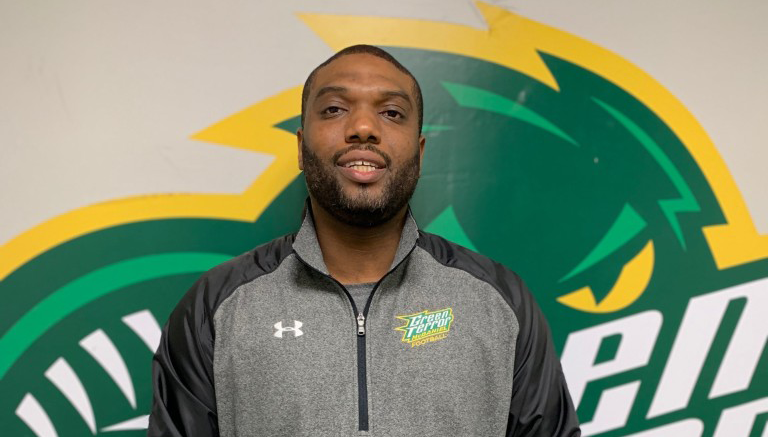 The College announced on March 8 that football Defensive Coordinator DeMarcus White has taken over as head coach. White takes over from Mike Dailey, who is stepping down at the end of the month for health concerns.

Dailey joined the McDaniel coaching staff in 2009. Under his leadership, the team finished with a record of 3-7 last season.

White will be the first African American football head coach in the Centennial Conference and at McDaniel.

McDaniel’s football program is in its 124th-year. The Centennial Conference was founded in 1981.

For White, the historical milestone reflects a selfless attitude that he demonstrates and encourages others to have.

“I am very proud to be able to carry the torch and open the door for all races and cultures,” White said. “I am very proud to put this responsibility on my back and shoulders with the support of my family and the McDaniel family.”

“[White] becoming the first African-American head coach is amazing,” freshman Habeeb Baba said. “It is a little disappointing that it took so long, but the fact McDaniel was the first team to make change is great.”

Recognizing the cultural impact made, White also understands the impact he can have on his team.

“At the end of the day, I am a grassroots guy,” White said. “I am a football coach and I know that [football] allows our student-athletes to be able to open up different doors and opportunities for themselves.”

White also has a new goal for his program: a winning culture rooted in toughness.

“The motto for the McDaniel College football program moving forward is tough,” White said. “Tough to us means finishing everything you do and representing the program in the right way by holding your head up high.”

The origin of establishing toughness as the team focus is not a trait that White brings into the head coaching position, but one that was well established before joining the program in 2016.

With the timeline of the coaching transition being a whirlwind of excitement, the players under White recognize the passion and leadership he brings in the head coach position.

“Coach White brings the juice that the team needs,” senior Dustin Miller said. “His energy is unmatched and his experience combined with his passion and intelligence for the game make him the perfect fit.”

Athletics have been a part of White’s entire life. A Maryland native, White comes from an athletic family. Beyond that, football has been a gateway to much more than sport.

“I absolutely love the sport and everything it stands for,” White said. “Having the ability to be able to interact with different cultures and economic backgrounds while creating lifelong relationships through the sport has been a humbling experience.”

With spring ball fast approaching, White recognizes there is a foundation of success already established in the college’s history and gives respects to those who coached before and the community for its support.

“The community support here in Westminster, Carroll County, and here on campus has been outstanding,” White said. “The people here are fantastic and everyone knows you by first and last name. Everyone seems to have a smile on their face every day.”

Women’s Soccer Bears Down in Win Over Ursinus