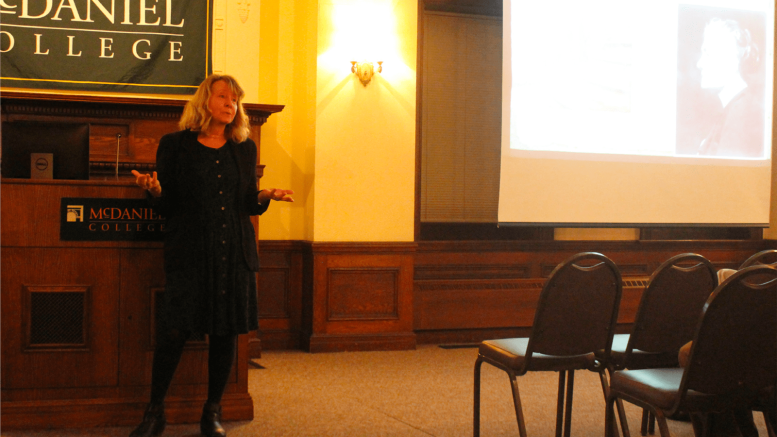 On Tuesday, March 12, Julie Dobrow, Ph.D., director of the Center of Interdisciplinary Studies and senior lecturer and senior fellow at Tufts University, visited McDaniel to present her talk “Sorting through the Clutter: The Intensively Collected Lives of Mabel Loomis Todd and Millicent Todd Bingham” for the College’s annual Ridington Lecture in McDaniel Lounge.

Dobrow described her work studying the two women responsible for publishing Emily Dickinson’s poems, which was compiled in her 2018 book “After Emily: Two Remarkable Women and the Legacy of America’s Greatest Poet.”

According to Dobrow, she did not initially set out to be a biographer. However, her work at Tufts University encouraged connections across disciplines and she was an avid biography reader. Reading about Emily Dickinson, Dobrow first found out about Todd and Bingham.

“When I discovered that no one had ever written a biography of either woman and that there were more than 700 boxes of primary source material at Yale University where my daughter had just begun her freshman year,” said Dobrow, “I couldn’t think of a better set of reasons to get started on a dual biography: a subject that I was interested in at a place I wanted to have an excuse to visit.”

In the lecture, Dobrow briefly explained her process sorting through all the papers Todd and Bingham left behind, the challenges she faced along the way, how attached she became to these women the more she read about them, and a bit about each of the women’s lives.

Dobrow hopes her book will introduce readers to the lives of Todd and Bingham, offer relief to mothers and daughters everywhere by depicting the relatable and complicated relationship between the two, give the women recognition beyond just publishing Dickinson’s poems, and shed new light on the poems themselves.

Dobrow ended the lecture by reading an excerpt from the afterword of her book, entitled the same as the talk.

“Getting to know Mabel and Millicent so intimately has inevitably meant that I had emotional moments along the way,” said Dobrow. “When I walked out of the library [after the last day of research], entranced, the snow on the ground was startling because I had been lost in an October long ago. Darkness had already fallen, and it felt like I was in another world. I was.”

Following a brief Q&A, event organizers held a raffle for students to win signed copies of Dobrow’s book and Candace Ridington’s novel “Rubicon: The Love Story of Emily Dickinson’s Brother, Austin, and Mabel Todd, the Woman who Saved Emily’s Poetry,” which was the subject of the Ridington Lecture in 1999.  Both books are also available for purchase in the campus bookstore.