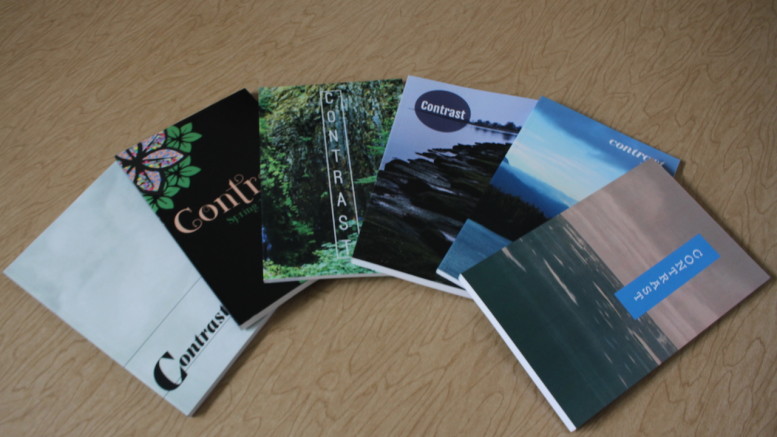 Prose, poetry, non-fiction, and the arts: four diverse categories, one eclectic group of writers. Contrast is McDaniel’s student organization for literary expression, with writing workshops, years of experience among its leaders, and if that wasn’t enough, $100 cash prizes for kicks.

Senior Emma Driban, the co-editor of Contrast, has been a member since her freshman year.

“I’ve always been a big fan of reading other people’s work and trying to improve their writing,” Driban said with a smile. “I think I like helping people with their writing more than I like writing myself.”

Driban was involved in a similar organization at her high school and wanted to tackle bigger projects with her editorial skills when she came to McDaniel.

With over 35 active members and almost 60 people subscribed to their email list – and not to mention their annual magazine – Contrast has been the opportunity Driban hoped for.

Contrast not only aligned with Driban’s desires, but also allowed her to continue her passion of helping others with the skills she has already obtained as an English major.

“That’s what it’s all about,” Driban said. “The editors won’t be judgmental if the authors don’t want us to be, but the whole idea behind Contrast is to promote everyone’s interest and improve everyone’s skills in creative writing – especially if you don’t have a starting point or are hesitant to begin.”

With her passion fueling her commitment, and her English experience as a powerful resource, Driban plans to continue the expansion of Contrast.

Marya Kuratova, Driban’s fellow co-editor of Contrast, has also been involved with the magazine since her freshman year. Her high school didn’t have an organization centralized around creative writing, so Contrast was a big deal to her when she joined.

After two years in the club, Kuratova felt that she had some thoughts that could greatly improve the club, and worked hard to earn the co-editor position her junior year. She detailed these expansionary plans: writing workshops.

“In the past, Contrast really only existed in the spring semester… there was no sense of community,” Kuratova said. “The idea behind these writing workshops is to give people a chance to meet the other members of the club, learn from each other, and improve their writing together.”

Kuratova implemented these plans starting this semester, and so far, the workshops have been met with positive feedback.

Maddie Lee, a freshman and new member to Contrast, particularly enjoyed the element of random story prompts. She says she is never really working on any long-term writing efforts in her free time.

“The random prompts are more of a workout, instead of playing an entire game,” Lee said. “They keep your skills up, but don’t exhaust you.”

Lee was immediately drawn to Contrast after speaking with Kuratova at the Involvement Fair and learning of the organization’s focus on group creative writing.

“[Creative writing] is a habit that one can easily fall out of when trying to do it individually,” Lee said.