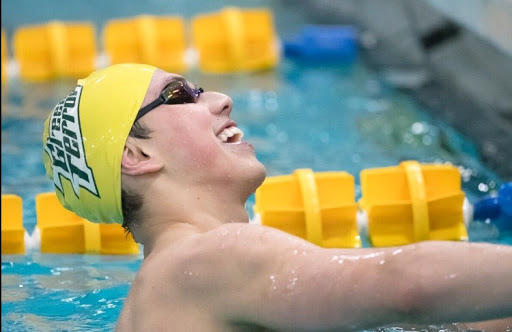 All he ever wanted was to fit in. It’s hard to believe that Jose Pac, an international student from Guatemala and swimmer for the Green Terror, was once struggling to find stability and happiness in his life.

Those who know Pac are quick to talk about his exciting energy and naturally competitive spirit.  On campus, the biology major is known to flash people his trademark smile. He carries himself with a cool demeanor, yet possesses a personality that is gentle and welcomes people with a hospitable warmness.

“He’s got the tools you need to be exciting,” Men’s Swimming Head Coach Jeff Hiestand said. “He’s very exciting and ready to swim fast every day.”

Pac maintains a heavy schedule. Along with swimming, he works as a resident assistant, is part of Global Fellows, studies in the Honors Program, and serves as the recruitment director of Alpha Sigma Phi fraternity.

He’s popular, too. Pac loves the people and the people love Pac. Surprisingly though, the signature energy he has become known for on the Hill is the result of years of working tirelessly to find acceptance and happiness.

Growing up in his early years at school, Pac felt isolated from his peers and fellow students.

“Back home, I didn’t fit in with the people in my school. I felt like I was very different from them,” Pac said. “I was alone.”

Struggling daily in facing his personal roadblocks, Pac did find solace at the pool. Swimming became his go-to stress-reliever. The activity let him clear his mind and allowed him not only to achieve physical fitness, but to sharpen his mental fitness as well.

“I was happy to go swim after school. That was my big thing. I feel like swimming was my base to find value in myself,” Pac said.

He found in swimming what he couldn’t find in other people. It was an escape from the pressures of school and living up to the expectations of others. It was his love and commitment to the sport that allowed him to develop his talents as a top swimmer in high school and to eventually make his way to McDaniel.

Since stepping into Harlow Pool, Pac has been all systems go. If there is one word that perfectly describes Pac, it’s exciting.

“Everyday, he always has that ‘race’ mentality. He always has that competitive edge that a lot of people lack,” said teammate Grayson Blanchard. “He’ll pump everyone up and get them going.”

Much of that excitement and electricity that Pac has about him is a big reason why he is training to potentially represent the Guatemalan National Swim Team at the 2020 Summer Olympics in Tokyo. He wasn’t sure what he wanted to do with swimming when he got to McDaniel, but the decision to pursue this goal was motivated by his desire to set an example and make his family proud.

“I came here to McDaniel and joined the swim team unsure of what I wanted to do,” Pac said. “The team had a good season and a lot of people were supporting me. Then I thought to myself, ‘I want to do something.’ Something that I can tell my children ‘I was able to do this.’ I also have two younger siblings, and I want them to achieve even greater things than I could achieve. If I can help them out, they can go even farther. If I can make the Guatemalan National Team, I can set those foundations for my family.”

Despite all the monumental changes in his life, Pac remains modest and sticks to his roots. His mother works as a small businesswoman, and his father, who Pac considers his hero, is a chemical engineer.

“My whole entire life, when I was struggling, when I wasn’t doing well in school, swimming, or anything, my dad was the one that always kept me going,” Pac said. “He’d do anything for our family. He wouldn’t eat so we could eat. When we had some economic hardships, he did anything he could. He’s a very hard-working man and he still works hard for me.”

Even though he is chasing his Olympic dreams, Pac is still very ambitious in planning what he will do after his days at McDaniel are over. His ultimate goal is to become a dermatologist.

“My dream is to go to medical school. A big goal for me is to attend The Johns Hopkins University School of Medicine,” Pac said. “I’d like to be a dermatologist. Back home, there’s a lot of need. If I can help people with skin problems, I can improve their lives.”

Through school, work, and swimming, Pac has found a balance that satisfies him. With a brand-new swim season coming up and three more years on the Hill, Pac likes to live by a John F. Kennedy quote: “Do not pray for easy lives. Pray to be stronger men.”