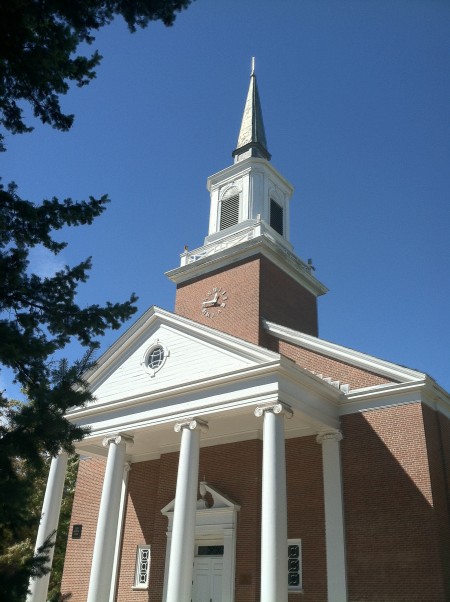 You never know what you’ve got until it’s gone.

You never know what you’ve got until someone tells you it’s gone. This was the case with the Big Baker Bell. Yes, of course it’s ringing now, but did you know that the first two weeks of the fall semester, the bell had not been ringing every 15 minutes?

“I didn’t even notice, but now that I know, I want it back!” said junior Daniel Morales, during the first week of classes.

“It’s really sad because I got used to hearing the bell,” said sophomore Josh Harding. “That’s how I kept track of if I was late or on time. And now that it’s not there, I have to check my own time; it’s inconvenient,” said Harding.

To blow your minds even further, the Big Baker Bell is not even a bell. It’s actually a recording of a carillon programmed to ring every 15 minutes. It also plays the College’s “Alma Mater” every day at 9 a.m., noon, 6 p.m., and 9 p.m.

“A carillon is a series of tuned bells that play from a tower. Historically, they are made of real bells,” said College Organist and adjunct professor, Ted Dix. “At Big Baker Chapel, we have an electronic carillon, so the tones are produced digitally and projected through a speaker,” he said.

Let’s face it, McDaniel, without the carillon ringing, how would you know that there’s a mere 15 minutes of class remaining? Without the carillon, what would interrupt your phone calls in red square when the clock strikes noon? There is simply nothing like it. And for you first year students, there’s no need to invest in a watch when you’ve got the carillon, which can be heard from the Alumni Hall all the way to North Village

After a senior McDaniel Student fell off the bell tower last spring, there was some speculation among the student body that it may have been the reason the bell was shut down.

“I thought maybe it had been turned off because something had went wrong when the student climbed on it,” said senior Melissa Rosa.

However, according to College President Roger Casey, during the summer the carillon was temporarily shut off in order to film a virtual tour of the college campus. The company filming this tour did not want the carillon interrupting the footage being captured for the online video. This virtual tour is a new feature that can be found on the college website. It’s aimed at prospective students interested in getting a quick view of the college campus without having to step on campus soil and was produced in the hopes of attracting more students to the college.

Because Physical Plant is located off campus on Pennsylvania Avenue, they were unaware that the bell hadn’t been operating normally. According to the Physical Plant director, Torgeson Stafford, the bell had to be reset due to a system glitch. “It was reported to us and we fixed it as soon as we got the word,” said Stafford.

Returning students concerned about the bell talked to administrators, Physical Plant, and President Casey until work orders were put in to bring the bell back. “It adds something to the campus. It’s like a tradition,” said senior Brittany Fleming. “That’s why I mentioned it to President Casey when I noticed it wasn’t ringing.”

President Casey commented, “Living on campus, I didn’t even notice the bell was gone until a student approached me. I’m glad that students love the bell so much that they were willing to bring it to my attention.”

Concerns of the student body have definitely played a significant role in bringing the chimes back to its regular schedule. Now, if we can get enough students to ask why the Honor Code billboard for the class of 2013 hanging over the staircase in Decker Student center has not been replaced with the class of 2014, we could get that changed too. But that’s another story…

From Transfer to Terror