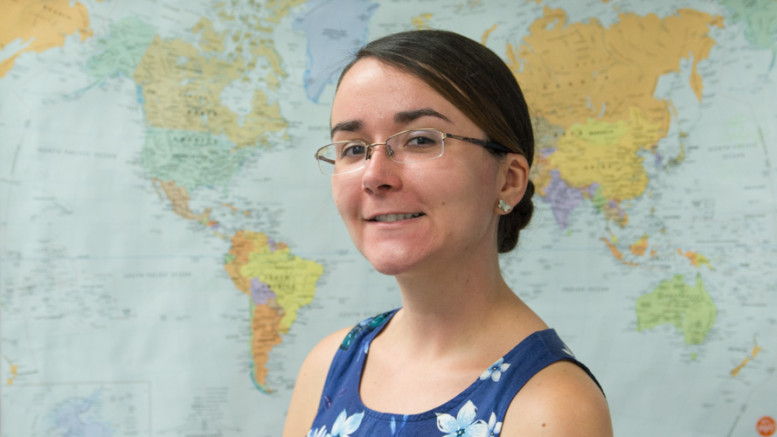 There’s a new face in the Center for Experience and Opportunity, in a newly renamed position and relocated office: Elizabeth Davis, the Director for International & Off-Campus Programs.

Davis’ journey to her current position has its origins in her own undergraduate experience at Ohio Wesleyan University, where she double majored in psychology and Spanish. Going to college opened Davis’ eyes up to the world. She states, “I grew up in a very rural, homogeneous community that was 99 percent white, so I didn’t have much experience even within the United States with people different than me.” In college, however, her fellow students came not only from a diverse range of backgrounds within the U.S., but also from around the world.

Another part of college that had a notable impact on Davis was her experience abroad. “I studied abroad in Spain, and in that experience I felt like I grew a lot and learned so much that I wanted to help other students have these experiences,” she says. In addition to this semester program, Davis also embarked on two faculty-led programs: one to England as an undergrad and another to Italy while working on her master’s degree.

On wanting to give students the experience of study abroad, she remarks, “I was a student who probably wouldn’t have gone abroad if it wasn’t for the Spanish major, so I wanted to help other students know that they could go abroad even if they didn’t think about it before.”

After earning her master’s, Davis landed her first job at Kansas State University as a study abroad advisor. After about two and a half years, she returned to Kent State to work as an education abroad advisor.

Dr. Amy McNichols, the Associate Dean of International and Intercultural programs, asserts that an elaborate, national hiring process, in part, involves reviews of applicants by a committee. After Skype interviews, select candidates are invited to campus.

Now, says McNichols, Davis will oversee all outbound students participating in study abroad opportunities, which extends to faculty-led Jan Term programs. On study abroad, McNichols states, “It’s very important to me, and it’s an integral part of my work that students go abroad, but it’s definitely in [Davis’] wheelhouse.”

Davis chose to come to McDaniel for several reasons. Chiefly, she wanted to return to a small liberal arts college like her undergraduate alma mater. In full, she states, “when I was at Kansas State and Kent State, there were so many students… I sometimes wouldn’t even meet students that I would send abroad. I didn’t like that.” Additionally, Davis likes the idea of working in a one-person office, stating, “I like the idea of all the responsibilities and challenges that come with being a single person in charge of study abroad.” Lastly, she enjoys this area of Maryland because it reminds her of where she grew up.

In the future, Davis hopes to develop a class about the various steps of studying abroad and increase the number of students going on semester-long programs beyond Jan Term trips, which she believes will be helped by a new online database. She states, “studies have shown that if there is purposeful guidance from a classroom, students really gain a lot more from the experience, and that’s one of my big goals.”

Be on the look out for Elizabeth Davis for all of your study abroad needs!