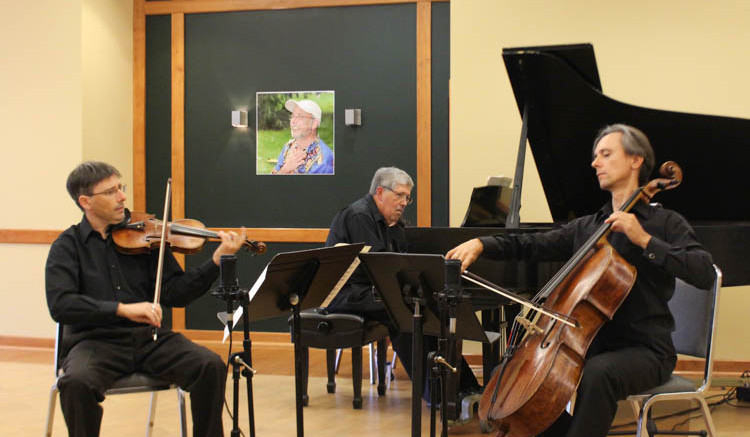 The afternoon of Sunday, Sept. 11, McDaniel College was graced with the outstanding musical talent of musicians Nicholas Currie, Maxim Koslov and David Kreider. The concert was dedicated to both the passed Bo Eckard and the victims of the 9/11 attacks.

John Holbert opened the concert with a brief introduction and a moment of silence for the victims of 9/11 as well as the loss of Bo Eckard, a former senior lecturer of the Music Department. 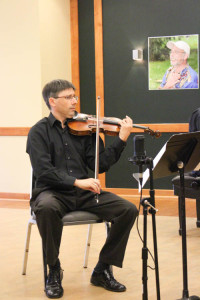 Nicholas Currie on the violin. Photo by Jimmy Calderon

The concert was sponsored by Chamber Music on the Hill, a music organization responsible for bringing chamber music to the McDaniel community.

Nicholas Currie, violin, and David Kreider, piano, started the concert with Claude Debussy’s “Sonata for Violin and Piano.” Debussy is best known for the dream-like quality of his music, an aspect that Currie and Kreider did not fail to deliver. The delicate slurs and the articulate pizzicato of the violin created a dreamy atmosphere in the Forum.

The next piece in the program was Sergei Prokifiev’s “Sonata for Cello and Piano.” For this sonata, Kreider accompanied Maxim Koslov, cello. Prokofiev’s works, similar to Debussy’s, have an ethereal aesthetic, although Prokofiev showcases more elements of the fantastic than of the dream-like. Koslov, just like Currie, did an excellent job at expressing Prokofiev’s style, with his intense yet delicate bowing and the strumming of all strings in the cello. 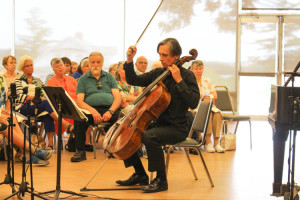 Maxim Koslov on the cello. Photo by Jimmy Calderon

After the intermission, the three musicians joined forces to deliver the last piece of the afternoon, Johannes Brahms’ “Trio for Piano, Violin and Cello, Op. 87.” As expected from the three experienced musicians, the delivery of this piece was beyond what anyone could imagine. Currie and Koslov entered in a dialogue with their instruments while Kreider echoed their conversation in the background with a fast-paced piano.

Overall, the performance was a treat to the ears. “8 Strings and 88 Keys” was a very successful opening concert for the 2016-2017 season. The next concert in the series will happen on Sunday, Nov. 13 at 7 pm in the Forum.