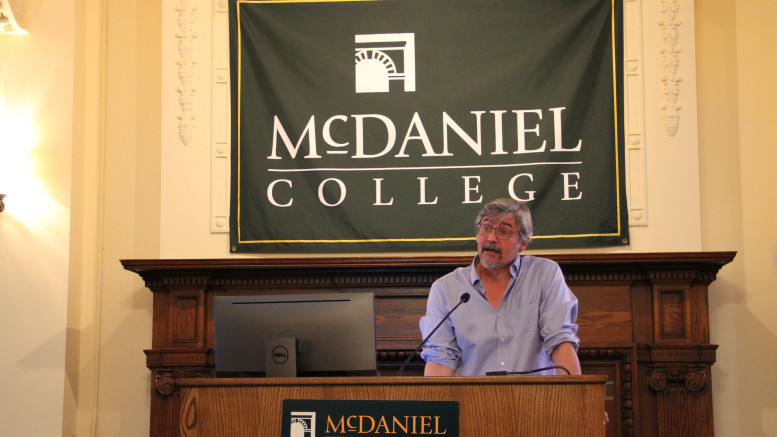 On Monday, Oct. 28, Paul Robbins, Ph.D., director of the Nelson Institute for Environmental Studies at the University of Wisconsin-Madison, visited McDaniel to present his lecture titled “Baby Bust” for the annual Visiting Scholar Program hosted by Phi Beta Kappa.

The evening began with a brief welcome from Michele Gribben, president of the McDaniel chapter of Phi Beta Kappa, who gave insight into what PBK is and some of the requirements for membership. As an honor society for the liberal arts, PBK emphasizes the excellence of liberal arts studies, which is also exemplified by the speaker for the annual lecture.

Robbins set the scene in the rural parts of Karnataka, India, an extremely impoverished area where people have little access to basic necessities and urbanization has taken over as people move away from rural areas into the city.

Research predicts the end of population growth in the next half century. “There aren’t enough workers in India,” Robbins said, “because these laborers were never born.”

Robbins described a sense of “demographic paranoia” that comes up among certain groups that tells them that they should reproduce more, yet they hope that this child-baring sense of duty will fall to someone else.

“People in Ladakh are afraid that they’ll be outnumbered, and that they must reproduce more, but they also want smaller households…they think it’s someone else’s problem,” Robbins said.

Robbins claimed that 25 percent of the world’s population is over 60 years old, when it has historically been only 10 percent. With numbers like those, it becomes hard to deny that population growth is slowing down. In fact, Singapore took their National Night, a celebration of the nation’s birthday, as an opportunity to encourage citizens to “let their patriotism explode” and combat low birth rates.

While citizens are encouraged to reproduce, immigrants are actually discouraged from procreating. These ideals come from “raceful and racist” beliefs and fears regarding population growth.

In areas where birth rates are on the decline, it all comes down to what women have access to.

“In places like China, where women work, have more autonomy, and better healthcare, they also are having less children,” Robbins said.

Robbins also explored the environmental impacts of population decline. With the emptying out of rural landscapes comes environmental problems, because labor is replaced with herbicide, pesticide, and tractors: more harmful technology and machinery.

“Labor disappears and the land gets worse,” Robbins added. “Fewer workers means there will be more robots, not the other way around.”

In addition to ecological change, Robbins predicts that one of the most hard-hit areas of population decline will be the elder-care industry.

“Seniors lack resources and there can be a lot of violence against them,” Robbins said. “The more there is of them, the more violence…The most exhausting work will fall to female immigrants in this country.”

Despite the challenges, Robbins maintains an optimistic outlook.

“This transition isn’t the end of politics or economics,” Robbins said in closing. “It’s actually the beginning.”

The lecture was followed by a 20-minute Q&A.