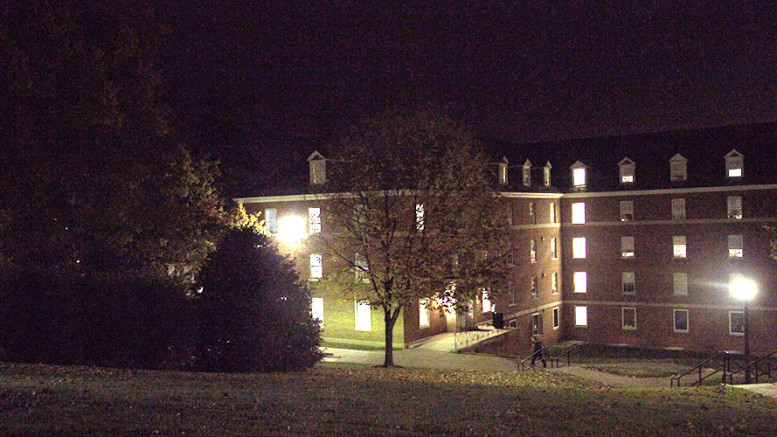 Like many older colleges, most of McDaniel’s buildings are said to be haunted. Besides the legends surrounding why ghosts are haunting certain places on campus, there are also legends about the ghost sightings themselves. Many of these stories have been passed from student to student, although some accounts are still being told first or second-hand.

There are two ghosts that are supposed to live in one of the freshman dorms, Whiteford specifically. The legend surrounding the first ghost, referred to as the ghost of 428, is that there once was a student who stayed at the college during January for a class, but became depressed. She stopped going to classes, and eventually committed suicide before the semester had ended. As none of her friends were there, no one noticed that she was missing. Later into the spring semester, her death was discovered after other residents began to complain of a smell on the fourth floor.

Senior Jimmy Calderon says that he knew people who had lived in that dorm. He explains that the room was creepy, and he never returned after visiting the first time. “The worst stories that I have heard are people being woken up in the middle of the night with things floating in the room and scratches in their back.”

The second ghost in Whiteford is said to be that of a young boy. His father was among those working on renovating the building, and brought his son with him to work. Tragically, the boy fell from the stairs on the third floor and died. According to legend, the ghostly boy still wanders the second floor that he fell to. It is said that sometimes child’s laughter can be heard, even though there are no families visiting.

Calderon also has secondhand knowledge of this ghost. “They hear children’s footsteps in the hall, as if they are playing on a wooden floor, but all of the floors there are carpeted.”

There is also another young ghost that is supposed to live in Levine Hall. His story, like that of the boy in Whiteford, is also tragic. The boy was supposed to have been hit by a horse-drawn carriage on Main Street outside of Levine and since then has haunted the building.

According to senior Savannah Dawson, the ghost enjoys playing pranks on those who come to the music building. She says that she has heard stories from professors saying that the ghost enjoys to play the piano, slam doors, and move or steal objects from locked rooms. She recounts one story, “[He will] play piano on random floors when the building is empty. He scared the secretary one evening when she walked up to see who was playing and the music was suddenly on the floor she just came from, changing floors when someone comes to investigate.”

Dawson has also been told of when a professor may have encountered the mischievous ghost when alone in a room and says, “He turned around and saw a music stand rocking madly back and forth before jumping in the air and slamming down again, going still immediately on impact.”

There are several ghosts in the theater that the actors and technicians have seen over the years. One ghost, called Harvey, resides on the main stage and has two different stories for how he came to haunt the theater at McDaniel. In one version, Harvey was a student who used the balcony in the theater to commit suicide. The other version is similar, but in this story Harvey does not throw himself off of the balcony, but was rather a theater tech who was working in the theater when he fell.

Harvey is considered a friendly ghost by the theater community. There have been several stories of students encountering Harvey while working late at night, including the ghost throwing a phone across the stage late at night, quickly sending the students back to their rooms.

The mainstage ghost not only apparently sends tired students back to their dorms, but also may try to protect them. According to Hawk, a student from several years ago came across the ghost while at the theater alone, “He was working in the theater at night by himself on a ladder, which you should never ever do and this is why: he was in the balcony, and he fell. He said he felt something grab him and pull him, because the ladder went crashing over the side of the balcony and he fell just inside the balcony railing.”

There are many other ghost stories and legends that students have passed down during the years. You can find more stories here or through Alpha Psi Omega’s ghost tours from Oct. 27-31.

Want to Get Involved? Give Back to Your Community!