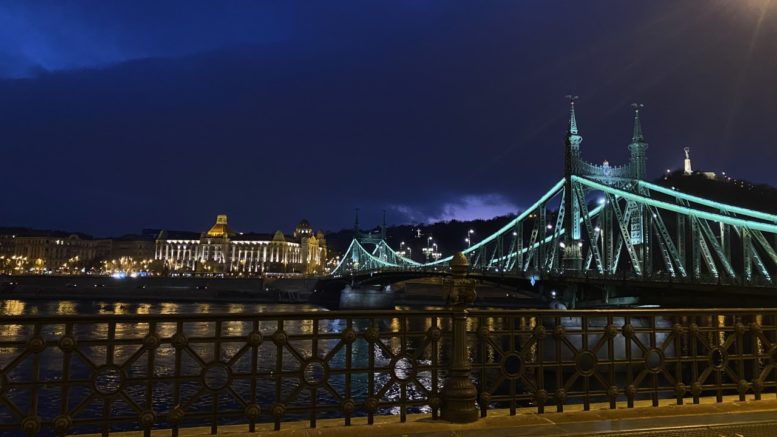 Hello from Budapest! I am studying abroad this semester at McDaniel College’s location in Budapest, Hungary in Europe. I arrived in Budapest on Jan. 23 for orientation. All of the abroad students go through a week of orientation to help us adjust to being in a new country. Orientation looked a bit different than it did in McDaniel Westminster. Instead of learning about just the school itself, we learned about the culture, how to get around, how to adjust to living in a new city, and little things like the best places to get groceries. We also learned a few key words and phrases in Hungarian. Before getting to Budapest, I had no idea what to expect other than what I read online and in travel books.

I live in a single studio apartment in a building with other McDaniel abroad students. It comes with my own bathroom, kitchen, dining area, desk, couch, washer, etc., and even a heated towel rack in the bathroom! Most apartments in Budapest do not come with a dryer so I have to hang dry all of my clothes, which definitely took some getting used to.  The apartment building is located about five minutes from campus and is a super easy walk. Nearby the apartments, there are various places to eat within a two-minute walk—even some places that are in the United States like McDonald’s, Burger King, and Starbucks! The biggest adjustment I feel like I had to make was adjusting to going to school in a city.

The school is in the middle of the city, so it is very easy to go and hang out at a local café or restaurant during the day between classes. There are dozens of places to eat or grab a quick coffee all within a five or ten minute walk of campus.

When I first entered the school, I was surprised that everything happened within one building, but I soon realized it made everyone a lot closer.  All of the classes are held in just one building, which is similar to the size of Merritt or Hoover Library on Westminster’s campus. Since all of the students and staff are always in the same place together, it is very easy to meet each other, giving the school a close-knit feel. This close-knit community also comes from the small size of the school, since there are only about 150 students on campus. Class sizes are generally smaller here, and usually consist of about five to 20 students. My smallest class has six people in it. It was strange to have such a small class at first, but within the first week I realized how beneficial it was to be in such a small class. It is much easier to have conversations and interact with my professor and classmates. It feels like a conversation/ discussion even when we are having a lecture. Having a class as small as six students makes everyone’s opinion feel extremely valuable to the class dynamic. The school is filled with students from all over the world, not just students from Hungary. I have met students from multiple different countries. Everyone is so accepting of every classmate and curious about where they are from and how schools may be different in other places. I have only had classes for two weeks now and I have already made tons of good friendships. Many people ask me what campus is like in Westminster versus Budapest. Everyone is always eager to learn about each other.

Google Translate has been a life saver here. There is a feature on the app where you can take a picture or scan objects and Google Translate will give you the translation right on the photo. This has come in handy when I am trying to read how something should be cooked or even what  type of food is in a store.

Another time it came in handy was my first week here when I had a little alarm scare… or what I thought was an alarm. I had gone to the store and was only gone from my apartment for about five minutes. When I came back and started to unlock my door, I could hear a faint alarm sound. As I opened it, it got extremely loud to the point where it was ear piercing. I immediately thought it was a fire or smoke alarm, so I made my way downstairs to go outside. As I went downstairs, I looked around the building to see if anyone else was leaving their apartment. I didn’t see anyone else panicking and I saw someone go into their apartment, so I quickly realized this alarm was only coming from my place. I looked around the apartment to see if anything looked like it was smoking and checked the outlets. My first fear was that somehow my plug converters that I need to convert the European outlets to fit my American plugs, caused a fire even though I had made sure to check the voltage capability before using them. There was nothing wrong with any of the outlets. Then I decided it must be a sort of mechanical alarm, so I went to the front desk and had a staff member from the school on the phone with me so she could explain what was going on in Hungarian to the apartment worker. He then gave a sort of thumbs up motion and came upstairs with me. He barely spoke English so the entire time we used Google Translate to communicate, which was honestly a fun and heart-warming experience. As soon as he got to my apartment and heard the noise, he said “the doorbell is very very old, sound is not dangerous,” while making a motion explaining that my doorbell had gotten jammed. I had never used or heard the doorbell, so I had no idea what it sounded like. Then he began trying to fix it and said something in Hungarian. Upon seeing the confused look on my face, he pulled out his phone, typed in the word “knife” and had his phone say it out loud as he looked at me with a worried look, hoping Google Translate was saying the right thing. I was guessing he needed one to try to take the doorbell off, so I went into my kitchen to grab one. When I came back outside with it, he smiled and said “yes, knife!” and repeated the word knife a few times in an uncertain/ curious tone to ask if he was saying it right. When I said “Igen, knife!” (Igen means yes in Hungarian) he was smiling and happy he learned a new word in English. We both learned something that day. The doorbell was soon fixed, and the noise thankfully stopped.

I continue to get acclimated to the new country and new culture every day. So far, I am really loving this experience. Stay tuned for more stories about my semester in Budapest in the next print issue!

If you have any questions, feel free to email me at rea0100@mcdaniel.edu and I will try to answer them in my next column!