The McDaniel Free Press was lucky enough to recently interview Cameron Mullen, a representative from Yik Yak, the app sweeping McDaniel and colleges across the country. In the interview, special attention was paid to questions about recent controversies regarding the app, ranging from issues with bullying to reports of its use to threaten school shootings. Now, with answers in hand, we aim to see if the answers we received hold water.

Claim #1: What differs Yik Yak from other anonymous sharing sites is that “people have their privacy” and that is “all based on your location.”

On this one the truth is complicated. While Yik Yak is unique in how it has swept college campuses, it is not the first app to allow people to privately post. Indeed, apps such as Whisper and Secret have done the same, with Whisper even having a dedicated section for local posts. However, the content of Yik Yak is certainly unique, and surprisingly often much more mature than that of apps such as whisper (also Whisper allows pictures behind posts which is a one way trip to lots and lots of unwanted porn). And so although Yik Yak’s design characteristics are nothing new, its usage certainly is.

Claim #2: Yik Yak aims to prevent harassment in that they “give a ton of tools to the community to police themselves,” and use filters that isolate words often associated with harassment.

In this case, the claim is actually quite accurate, despite the recent media outrage. Though it certainly cannot be denied that bullying exists on Yik Yak, it certainly is either rarely seen or is quickly removed, either by the community reporting/down-voting it or through the aforementioned filters. In fact, it has seemed that as the school year has continued, the removal of such comments has become much quicker, often taking anywhere from five minutes to a matter of seconds. Likewise, the app has in its rules, which are shown immediately upon entering the app for the first time, that bullying and harassment will not be tolerated. Hence, despite skepticism, it seems as if Yik Yak’s claims are accurate. 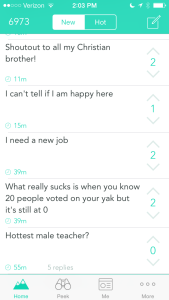 Claim #3: In regards to criminal threats, Yik Yak takes such events very seriously, and reaches out to authorities to help identify the person/persons making such threats.

While it again might be easy to lambast Yik Yak for being a platform for such threats, the facts again stack up, with officials at SUNY Canton recently stating that Yik Yak “were fully cooperative and provided crucial information” which helped lead to the arrest of the student who posted a recent shooting threat. The representative from Yik Yak noted that while the app was unable to provide authorities with the personal information of the poster, they were able to provide “the locations of where they’ve been and the other yaks they’ve posted,” which can help authorities identify suspects. He also noted that while incidents such as these might cause schools to ban the app, it is far more productive for them to work with the company and to “use it to their advantage.”

Claim #4: Yik Yak is often used for positive group actions, including when it was was used by University of South Carolina students to honor the death of a student at Clemson University

This story, in reference to the vigils held for Tucker Hipps of Clemson University, is both accurate in that it occurred and that Yik Yak was cited as having a role. Students have reported the app, as well as other social media sources were used to produce movements such as “Orange for Tucker.”

In conclusion, it seems that Yik Yak’s claims hold quite well, despite the allegations they face from various schools and individuals. The facts support the idea that while Yik Yak has definitely faced controversy, it had adapted to work with schools to prevent such harassment and threats from occurring.

Sounds of Change in the Honors Program

McVirus 2013: The Best of Social Media