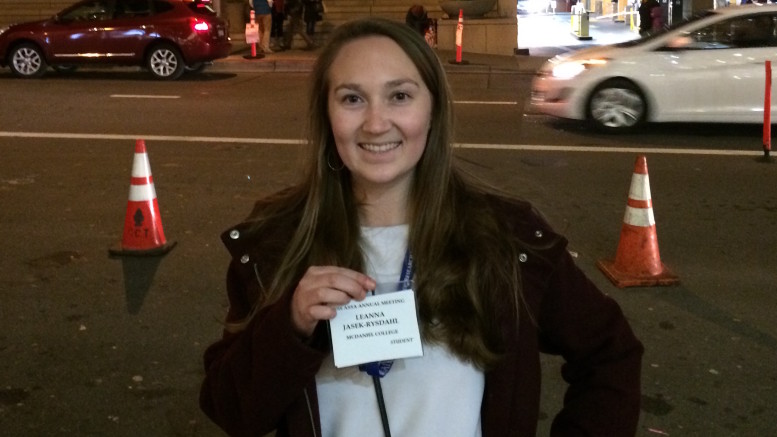 What is your preferred name and major(s) and minor(s)?
Leanna Jasek-Rysdahl. Majors: French and Political Science and International Studies

What are some of the jobs you held at McDaniel?
Writing Center Tutor, McDaniel Student Ambassador (tour guide), Parent Preview Guide

What organizations were you part of at McDaniel?
Phi Mu, Global Zero, French Club, First Year Team (as a Peer Mentor and Advisory Board member), Honors Program, Global Fellows

How much did you enjoy your time at McDaniel?
Attending McDaniel was the best decision I have made. I spent eight years before college researching schools because I constantly thought of leaving my hometown and attending college. My parents were worried because they thought I would have too high of expectations for college, and when I finally entered college, I would be disappointed. My time at McDaniel has surpassed the expectations I held four years ago. There were most certainly difficult times throughout my four years, but the community at McDaniel and the people I had the chance to meet and learn from made the experience invaluable. Each day was new and exciting and I could not have asked for a better four years.

Who do you think is/was your best mentor(s)?
I have been influenced by so many people at McDaniel. I would probably say Dr. Pam Zappardino, Dr. Leahy, Dr. Grice, Dr. McNichols, Dr. Baage, and Prof. Ambrose have been some of the most influential mentors.

What were some of the challenges you encountered and how did you overcome them?
I did not receive anything lower than an A in high school, and my first semester in college, I struggled with a math course. Toward the end of the semester, I knew I would not receive an A in that class. This is a small example, but I struggled with that “blemish” and I continued to obsess over everything that did not fit my vision of perfect for a very long time. It did not help that I had no idea what my academic passions were and I felt lost on campus. After studying abroad, I realized that sometimes, being lost is fun. I did choose a major, and that helped, but even if something is uncertain, or not how I pictured it would turn out, I have gained more flexibility that enables me to frame the situation differently.

I will be serving with AmeriCorps for one year in Minneapolis, MN and working with the refugee population in the city. During the fall, I plan to apply to PhD programs in political science.

What is your best memory at McDaniel?
My favorite memories all include conversations or participating in random activities with my closest friends. Whether it was traveling to DC to attend a lecture on peace, holding Thanksgiving in my apartment with my friend who is also from the West Coast, or having weekly lunches with a close friend, these are times that I will greatly miss after graduation.

Take advantage of every opportunity McDaniel can give you, this includes talking and meeting the students and people on campus. It truly is inspiring to talk with students here who are passionate, kind, and want to change the world (and will).