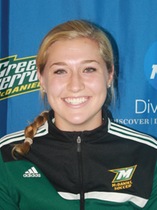 My Freshman and Sophomore year I worked as a lifeguard at Harlow Pool, and then my Junior and Senior year I worked as a student athletic trainer in the Training Room up until this spring.  I know currently work off campus at a local PT clinic.  I have also done a variety of volunteer work for McDaniel and in the community.

I am so happy that I chose McDaniel because I have been able to meet people who have changed my life.  I also was able to prepare myself for PA school and had plenty of experiences that helped me grow as a student and as a person.  My senior year has been a true blessing; from making it to the Sweet 16 for soccer and getting into PA school, to just being able to spend time with my best friends.  I have had a great time on the Hill!

Dr. McCole in the Exercise Science Department was definitely my best mentor throughout my time at McDaniel.  He is my advisor, and not only helped prepare my course load for graduate school, but he also gave me a lot of beneficial feedback in my preparation for PA school interviews.  I have known him for over 4 years, since my sister also attended McDaniel, so being able to establish a professional connection with him has helped prepare me for my future endeavors.  I am very appreciative for all that he has done for me.

Being a student athlete has been difficult at times.  There are nights that I had to spend more time in the library because I had a late practice or game, and then some mornings that I had to get up for a 6am practice with an exam right after.  I was forced to manage my time well and prioritize what was most important to me.

My best memory would have to be going to Boston with my soccer team for the Sweet 16 in the fall and especially going to Spain with my team over the summer.  It is a fun group of girls to travel with, and I was able to play the sport that I love and create some great memories.  The worst memory is a tough one…I would probably say losing to John’s Hopkins in the Centennial Conference Championships. Although our season continued into the NCAA tournament, it would have been so rewarding to end my career with a championship title.

Get involved in a variety of fields.  A lot of people make the mistake of pursuing their future without any experience, so it makes it that much harder to figure out what your true passion is.  Hold a variety of leadership positions, apply for jobs, network yourself.  Anything additional effort that you make will pay off in the long run!

I think I covered most of what I have to say! I just would encourage everyone to follow their dream (as cheesy as that sounds) and to challenge yourself!