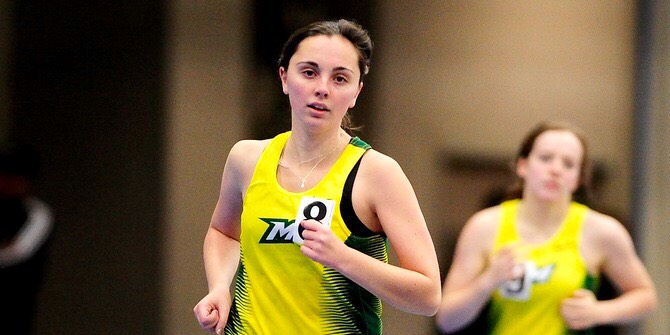 History and Spanish double major and I do a studio art minor.

I had an internship at Run Moore down the road and then it turned into a job and I have a job at Bytelion in Hampstead. Nothing at McDaniel though.

I did Relay for Life, I was on the board, just for the fall of freshman and sophomore year. I’m in Global Fellows, I lived in the Spanish House, and I’ve done Cross Country and Track, indoor and outdoor, all four years. I did the Forest Online too, if that counts.

So many people bash on McDaniel, especially now with the senior exit survey, but I’ve had a great time. I’m really grateful for McDaniel and they’ve changed who I am. In high school I didn’t talk to anyone, I was so shy, and now here I am, I’ve become so much more outspoken. But seriously, I love McDaniel, I truly do. I’ve heard a lot of negativity, but the history department – those professors are wonderful people. And the Spanish department, I was terrible at Spanish in high school, and I still kind of am, but they’ve stuck with me. Dr. Campero is the reason why I’m a Spanish major, she’s changed my life, she’s wonderful. I’ve only had good experiences here, I’m so grateful for McDaniel, good times.

Definitely Dr. Campero, she’s a wonderful person, Dr. McNichols who also does the Global Fellows Program, and Dr. Upton, he’s my second dad, he’s wonderful. And Professor Ambrose and Dr. Scullion. Everyone here has been so nice to me, especially Dr. Upton, he’s looked out for me and pushed me to do the Innovation Challenge which I would have never done.

I feel as though this is still relevant in track and cross country, but confidence. I hate competing, which coach doesn’t understand because he was so good and loved competing and most of the people on the team really like competing, but it never interested me. There have been some races where I got last and that’s been really hard to push through and that’s where it’s good to have these amazing people. It’s come down to my professors saying ‘you can do it’ and believing in me and it helped me overcome things. They’re kind of better than my parents in that your parents have to say those things, but these people are under no obligation to say them, and it’s so nice for these people to help me out.

Definitely the Peru trip and presenting for it. Presenting to a full crowd of people and having people behind you who are passionate about the same topic was a special feeling. Presenting the research and experiences we had together was super awesome.

It’s my earliest memory because I came for pre-season before any of the freshman came and that’s when I met Sarah [Lighter]  who I’ve stayed friends with since that first day. It’s been a family and even though it’s changed a lot, most of the people that were on the team still are. It’s been a stable thing in my life. Every day at 4 0’clock I know I have to go run whether I want to or not. It’s been a constant in my life. It’s a different side of campus because it’s not just all one major, it’s a bunch of different kids, and we all eat together and I’d probably never see them outside running so it’s nice to see them outside running.

What were some of your greatest sports highlights?

On paper, it says I got the record in the 600 meter race, but I don’t consider that my highlight. When it comes to track, my favorite thing is cheering for other people — Molly Murphy, when she got a PR in the 1k, I was in that race with her and I was right behind her, she passed me, and I was just so proud of her. I know it’s not exactly my sports moment, but I was tearing up at the end, I was so proud. And running with Mable [Buchanan] everyday is one of my favorite things.

Get a job. I’m hopefully going to be working at Bytelion full-time and I want to stay with Run Moore just because I enjoy working there, it’s a great business and the people are really nice, so hopefully I’ll be splitting my time up doing that. I kind of want to coach but it depends if I get full-time employment.

Join the track team, join cross country. Especially if you join the women’s team, you’d be in top seven because we don’t have that many women so you could go to conferences and could really make the most of your college career.

I think most of all what I’ve learned at college is that it’s really important to challenge yourself. If you’re not challenging yourself you’re not improving so why do something that you’re going to be good at without even trying so that’s why it’s important for me to do running so that I can always improve.

Take a class that’s way outside your comfort zone because that’s how you learn and it makes you feel pretty humble being schooled by some kid in your class who’s an expert on it. You just get bored when you’re sitting there thinking ‘I already know this’ and that’s what’s so great about things like the Peru class and being on the track and field team and being a Spanish major, I’m learning every day, I get to challenge myself.