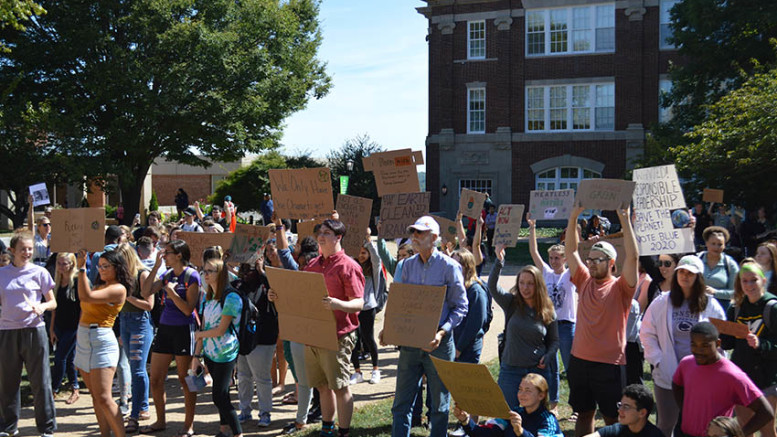 Millions are responding to the inaction of officials and corporations to take adequate measures towards sustainable development. McDaniel is doing its part to be active in the discussion of climate change. This movement was the first of many to take place during “Week for Future” from Sept. 20 to 27. Greta Thunberg, an internationally recognized young activist, inspired the movement through her protests in Sweden and her voice in front of governing bodies and on stages around the world.

In organizing McDaniel’s events, environmental studies and political science professors met with members of Green Life and the Progressive Student Union (PSU) to organize the gathering. Green Life is a relatively new organization on the Hill. They are an environmental club dedicated to fostering a greener campus and community. PSU is a student organization focused on political activism and social reform.

At noon Friday, people stood up and walked out of their dorms, classrooms, and offices. This disruption in their normal routine served to focus attention on climate change and represent resistance to the lack of measures being implemented to stop climate change world-wide.

The event began with Live Music Club members Jake Fine and Rachel Gunnerson singing while everyone was encouraged to create protest signs. The atmosphere fostered camaraderie among participants. They discussed policies, politicians, and environmental indicators troubling them most and considered future movements to remedy the troubling future of our planet.

During an open mic available to everyone, speakers volunteered to walk up the steps in front of Hoover Library to voice their frustrations and share calls to action with the crowd. They emphasized the importance of continuing the conversation around climate change in every space and participation in government. The event closed with a group song and a reminder to register to vote in Hoover Library.

The resounding message from the day was to continue to demand change and respect for our shared Earth, home, and McDaniel because, although we are currently surrounded by the privilege of clean air to breathe and food to eat, our future is not guaranteed by the lifestyle we are living now.