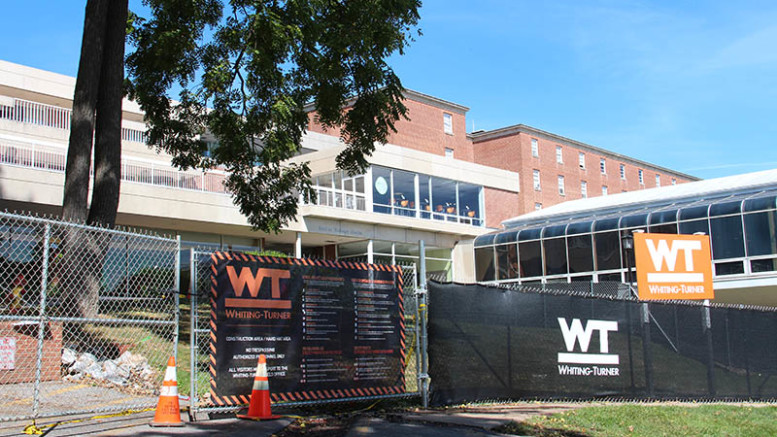 New changes are in progress on the Hill. These past few weeks everyone has seen the construction cones and materials arriving. It was only this week that they closed off the sidewalk leading into Decker College Center and walled off the Forum. The renovation is underway. In Ensor Lounge, you can see what the building will look like when renovation is complete. It looks nice, yes? A much-needed change for a building built just over 40 years ago.

But don’t be distracted by the modern glitz and glamour of those simulations. There is an overlooked issue that this renovation is planning to just gloss over: handicapped access to Hill Hall. Now you might be wondering what I mean by this, considering that it is Decker, not Hill, being renovated. While true, the public space outside Decker is also being renovated, and one aspect of this renovation includes the way Hill Hall is accessed from this space.

In front of Decker, next to the Forum, there currently sits a brick retaining wall. This wall will become new, direct stairs and what has been described as “a mini amphitheater for student gatherings and performances.” As interesting as this may be, the space used by the stairs and amphitheater would be better used for a wheelchair-accessible ramp connecting to the sidewalk and the basement floor of Hill.

Currently, an individual on wheels who wants to reach the basement of Hill Hall from Englar Dining Hall has two options. The fastest relies on two elevators: one in Decker to reach the top of the hill, and one in Hill to go back down. The second requires them to exit the lower entrance of Decker, roll down the sidewalk past Whiteford Hall (nearly all the way to Blanche Ward Hall), before backtracking up the (rather steep) hill past the Gazebo to Hill Hall. Both are unnecessarily inconvenient. A ramp outside Decker would shorten these treks tremendously.

It is common knowledge that McDaniel College is not the most handicap-accessible campus. We have received criticism in the past for this. Consider the lack of elevators in most campus dorms and administrative buildings. It is difficult and sometimes impossible to reach certain locations on campus on wheels.

A student who is handicapped could attend McDaniel for four years and graduate, but as an alumnus be unable to visit Alumni Relations on the second floor of Elderdice. Such irony! It would be fair to say the College has more public staircases than handicapped students. I am positive there is a correlation between the two.

Even as the renovation is going on, accessibility is limited, more so than usual. The new location of the Rec Lounge is difficult to reach as a handicapped student. Now located in what was Gold Room A, the Rec Lounge is a floor below the previous location, where the elevator does not reach.

Before the fence went up, one could access it by exiting the entrance of Decker, rolling down to Whiteford, then backtracking across to the pool door. Of note, this door is the only way for a handicapped student to enter the floor with the Rec Lounge. They would then have to make their way around the pool, before going through a set of doors into a stairwell. The Rec Lounge is entered from this stairwell landing.

Any non-handicapped students only have to walk down the flight of stairs next to Glar to get there. This was before the fence was put up. Now to reach the Rec Lounge, the common gathering area for the student body, handicapped students will not be able to use the lower doors in Decker, which would add even more time and energy to their commute.

The College has been taking steps to make campus more accessible. They have added automatic switch buttons on all major doors in the past few years. What they should be doing is literally taking the steps and replacing them with ramps. I find it hard to believe that when given the chance to improve accessibility on campus, the College would turn it down. If they have the money for a renovation, a ramp in place of an amphitheater would be a much better use of funds.

It would be cheaper in the long run to take small steps toward accessibility now, rather than replace everything later. I ask that the Board of Trustees consider adding this ramp to improve accessibility the next time they meet. It’s the least they can do.

The Bryn Mawr Controversy: A Question of Perception and Precedent