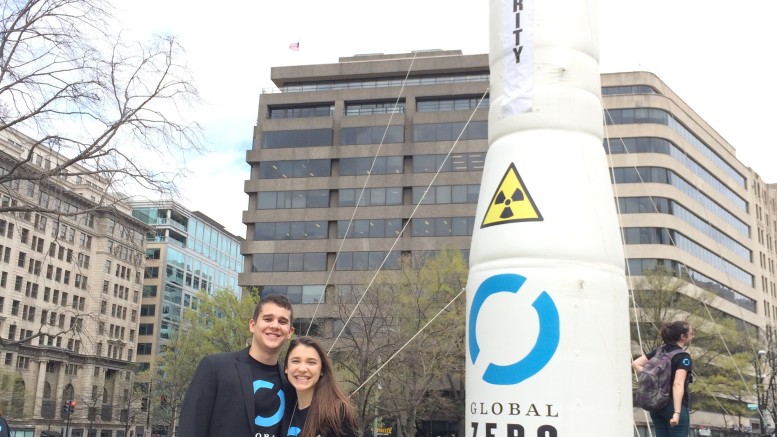 Have you ever wondered what it would be like to live in a world without nuclear weapons? A world where North Korea is little more than a laughingstock, where debates around Israel, Pakistan, and India don’t devolve into threats of total annihilation?

That’s exactly what Global Zero aims to do.

The organization has been around for several years, though membership and student involvement at McDaniel took a drastic dip in the winter of 2016. When I first took a position in Global Zero, I was astounded—this is an international organization, with thousands of members and a four-story inflatable nuke. How were people not paying attention to this? It should have been the talk of the campus, not a barely-noticed initiative held together by a few zealous members.

Then I realized something: people weren’t noticing because people don’t care. What would have been a top-tier organization a few decades ago is now a peripheral problem to most. People don’t take notice of nuclear politics, much less nuclear weaponry. For the average undergraduate, a test or a lacrosse game is more important than what two countries halfway around the world are fighting each other with. The only reason most of us even know about modern nuclear technology is because of North Korea, a joke of a country that makes more violent threats than weapons!

Global Zero has a lot to live up to if it’s going to reach its goal of ridding the world of nuclear weapons. Even though their cause is noble and they have the determination and grit to achieve what they want, nuclear countries are constantly making things more difficult for them. North Korea, true to its reputation as a land of drastic escalation, has not two weeks ago undergone its fifth nuclear weapons test, sending the Western world into a frenzy of speculation and preparation. India and Pakistan, lifelong rivals and two of the world’s most volatile nuclear threats, just fought another skirmish in the Kashmir, the disputed region between the two countries. Nuclear war seems a daunting prospect, an inevitability we may never be able to escape from.

Still, people keeping asking “why does it matter?” and “who cares about nukes?” It’s astounding, really.

Even the United States’ presidential candidates don’t seem to be focusing on nuclear politics. Our candidates have made a few standing comments about nukes (Donald Trump, in particular, is infamous for advocating a premature strike on Islamic State militants and North Korea), but their opinions are more unsettling than reassuring. The U.S. is embroiled in a state of turmoil, France is constantly being bombarded by terror attacks, the United Kingdom has its own problems to deal with. Russia, with its recent Crimea scare, is worrying parts of the Western world. China has old ties with communism, our once-great enemy, and sends aid to North Korea on occasion. Israel continues to stir conflict with its nuclear energy program, though it has now been confirmed that they house nuclear weapons.

All in all, it’s a nuclear world, and unless Global Zero achieves its goal, there’s a chance we’ll live to see a nuclear war.