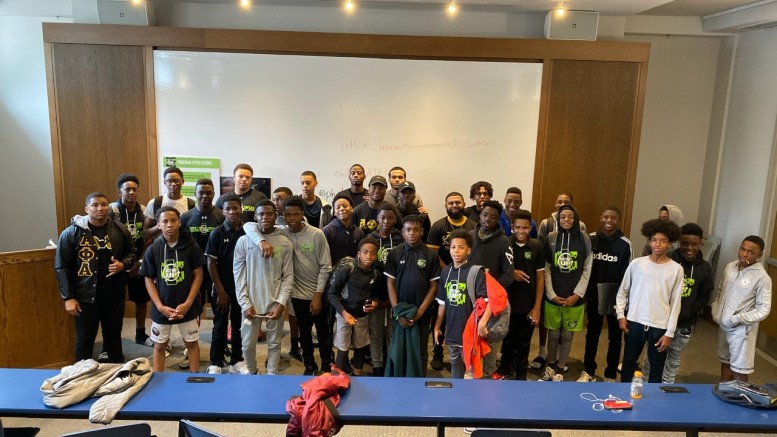 On Sunday, Oct. 20, McDaniel’s Phi Iota Chapter of Alpha Phi Alpha Fraternity, Inc., traveled down to Baltimore to speak with Shel Simon and his NextOneUp students about the importance of completing high school and furthering their educational career in college. NextOneUp (NOU) is a nonprofit organization that started with four men in 2009. Since then, NOU has grown to serve over a hundred young men in the Baltimore city area. The NextOneUp mission statement is, “transforming the lives of young men in Baltimore City by supporting and advancing their academic, athletic, and social development.” NOU has a 100 percent graduation rate from high school and 95 percent have matriculated to college or have picked up a trade.

Alpha Phi Alpha reached out to Shel Simon, the program director of NOU. Simon said he was excited to work with the fraternity because of the perspective they could provide the students, given that all the members are either current or former athletes as well as current students in college. When the fraternity arrived at Gilman High School, which is where NOU meets on Sundays, they took a tour of the program. They saw the different classrooms set up, as well as where students were learning about college admissions, Baltimore history, and financial literacy. When the fraternity brothers and the students met, they talked about the importance of education, the value that each student has not only in their sports but in the outside world as well, what it’s like being a student athlete, and positive decision making so that they can go on to graduate high school and be successful in college or in a trade.

A few weeks later, the fraternity’s secretary interviewed Simon to get some background knowledge of why he joined the NOU team, what motivates him when he’s around the students, and what the experience was like when Alpha Phi Alpha came down and spoke with the students.

Why did you become a part of NOU?

I started as a volunteer five years ago. There weren’t that many kids, only about 20-30 of them. I met the founder and believed in his vision of NextOneUp. I always wished this was something I had when I was growing up. I believe the support and resources that NOU give are unlike any other program in the city. These kids are using sports as a vehicle to get out of the adversity they see every day in the city, and what we’re doing is using education to balance their minds, because education is that much more important when trying to progress forward in life.

What motivates you to come into work with NextOneUp?

I am really into giving back to the young men in Baltimore City. I used to coach youth football in park heights in my mid 20s. When I was coaching, I was also dealing with high risk kids and wanting to do more for them. One young man that I’ll never forget was one of my running backs. I turn on the news one day a few years later, and there he was, 20 years old being sent to prison for shooting and killing a guy. He was really talented, but never made it out of Baltimore; he should’ve been in someone’s classroom at a university, not doing life for murdering someone in his neighborhood. Football is more than just coaching, it’s about teaching life lessons to the kids so that they can carry these lessons throughout their lives. NextOneUp transforms the lives of the kids and that’s all the motivation I need.

How was the experience with the McDaniel College Alphas?

That was love! All I do is promote college, leadership, and giving back to these kids. It was amazing for you guys to come in and give them something they can look forward to. A lot of kids will be first-generation students and many of them aren’t presented with the opportunity to be exposed to the college world. It was amazing for the students to see young men that look like them, that made it out of their neighborhoods, and I am looking forward to working with you guys again and holding that connection with you all.

Alpha Phi Alpha Fraternity, Incorporated’s motto is, “First of all, servants of all, we shall transcend all.” Giving back to the community, educating, and uplifting the citizens of the world is a priority for the organization. They were honored to have established a hopefully long-term connection with NextOneUp Baltimore.

From the archives: January on the Hill