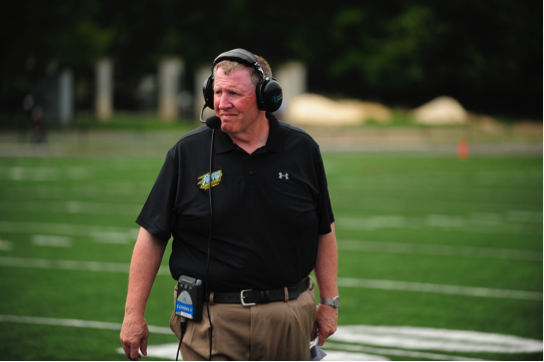 McDaniel Football is starting off its fall season with a new head coach, Mike Dailey. Coach Dailey has been the assistant coach for seven seasons, but is now taking over as the 25th head coach in program history with a different perspective than the past.

“I think my style is much different than Mike Hoyt,” said Dailey, “Mike was kind of an old schooled defensive coach that really was very stern in his demeanor. I am more guarded with the players and make sure they are in tuned with what we are doing.”

Dailey played football in high school and at the semi-professional level for a few years. He coached in the American Football League for 19 seasons, coaching in the league from 1997 until the league suspended operations prior to the 2009 season. He spent seven years with the Albany Firebirds organization, leading the team to the 1999 title while earning Coach of the Year.

Defensive lineman Ray Doh, a junior, states, “Coach gives us speeches, which leaves us motivated and it changes my mindset not just for football but my general mindset.”

Doh expects a lot out of this season now that Dailey is the new head coach. He expects wins, to become a better player, and for the team to get better now that they hang out on and off the field. He says, “Coach enforces team bonding so we are a team and not just individuals like in past seasons.” The team now hangs out outside of practice and games, which Doh trusts will give the team more chemistry overall.

Wide receiver Tyler DeMent, a senior, expresses his enthusiasm for his new coach, saying, “I’m ecstatic that Coach Dailey is our coach this season. He was my receivers coach last season so I got to be really close with him. It’s not often people get to be coached by a Hall of Famer. He’s a great role model and someone for us all to look up too.” DeMent’s past experience with Dailey established their relationship on the field right from the start, which makes him feel personally ready for the current season.

Coach Dailey believes in continuous work every day for preparation. “Our goal will never change,” said Dailey, “Our short-term goal is to win the next game and the long-term goal is to win a championship. As a leader that’s the way it always should be.”

The team has started off the season 0-2 after games against Catholic and Moravian. The loss to the Greyhounds kicked off Centennial Conference play last Saturday which will continue with McDaniel’s home opener on September 17 against Muhlenberg.