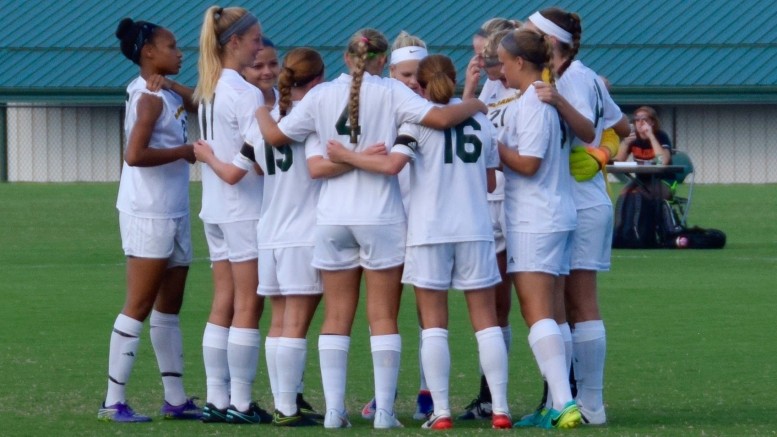 McDaniel Women's Soccer by Will Kroppe.

Posted By: Will Kroppe, Contributor September 16, 2016

Women’s Soccer has a lot to prove this year after a breakout performance last season where they finished third in the conference compared to seventh two seasons ago. Posting an impressive 10 shutouts, with stand out victories of 6-0, 7-0, and 8-1, the team is seeking revenge for an early exit from the NCAA tournament, where they lost in the first round to Oneonta by a score of 3-1.

The Green Terror are rolling into the 2016 season with confidence after such an outstanding 2015 campaign. Junior forward Paola Rosa has high aspirations for the year saying, “Last season’s defeats in both the conference semifinal and first round of the NCAA Tournament are what is driving us to have a better season this year.”

As a forward, Rosa plays a pivotal role in exploiting weaknesses in other teams’ defenses. She also mentioned that they are returning a lot of offensive talent, which will produce even better results after building chemistry and confidence for a year.

It is not always an easy road to the top. While the Terror are focusing all of their efforts on climbing their way up, 10 other teams in the conference are looking to do the same.

“It is not going to be an easy road, with a lot of teams in the conference returning key players, but if we add to the good things we did last year I believe that we can be very successful,” continued Rosa.

Things are already looking promising for the Women who have started the season at 4-0.

The Terror rolled into their first game ranked 25th by the NCAA.

They started the season off with a bang when they defeated St. Mary’s 4-2 on the road. Katie Kirschenmann, a junior forward, netted a pair of second half goals to seal the deal for McDaniel.

Both teams had nine shots but McDaniel had the edge in corners 10-2.

McDaniel’s home opener against Catholic was going well with the women up 3-2. With 21 minutes remaining, the game was called due to lightning and rain. A decision will be made to determine if the remaining time left will be re-scheduled for another date.

Despite the bump, the winning train kept rolling as the Women won their next three games against Kean, York (Pa.), and Marymount.

Even with McDaniel’s impressive start to the season, they still sit at the 25 spot according to the NCAA.

Head coach Sandy Lagana plans to use a 4-3-3 formation in order to utilize the team’s speed, which is unrivaled in the conference. She puts her players in a position to attack down the sides with their speed in order to open up the middle of the defense for easy opportunities to score.

The women look like a force to be reckoned with as they continue to dominate all teams on their way to the NCAA tournament.

McDaniel will open Conference play on the road against Muhlenberg on Saturday at 7:00 p.m.