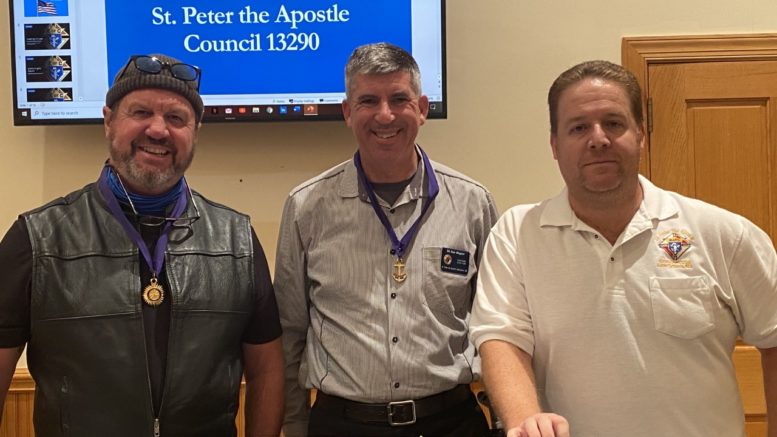 The Knights of Columbus is a Catholic fraternity organization that was established in 1882 to provide financial support to Catholic families after the loss of their  husband, father or son.

Today, the Knights offer charity work to any person or family who needs help all over the United States and different parts of the world. This is embodied at Council #13290 based at Saint Peter the Apostle Catholic Church in Libertytown, MD. In the Summer of 2020 as a way to give back to the community in the uncertainty of the times, the Council teamed up with the non-profit organization Advocates of Homeless Families in Frederick. This was to help families who are in danger of becoming homeless find apartments.

Dan Wagner, who is the current Grand Knight of Council #13290, has been involved firsthand since the conception of the program. Dan described how Advocates for Homeless Families helped homeless families find homes, but they were sometimes unfurnished. To help the families Dan said, “We went out into the communities and asked if anyone had extra furniture and if they said yes, we would go and pick it up and deliver it to the place where they were moving in”. “We’re solving two problems; we’re helping people get rid of stuff and we’re helping people get stuff”.

The program has helped ten families right now in Frederick. When asked if the deliveries have set dates or are random, Dan replied, “It’s more random and it takes a bit of coordination.”

Describing their most recent delivery, Dan described how a fellow Knight needed to get rid of furniture and had it delivered to his house and had it stored in his shed. From there, he began contacting people who he knows who may know people in need. When asked about the challenges, the main issue Dan pointed out was the need for more help. Going forward Dan expects the program to grow saying that their partnership with Advocates of Homeless families may increase and that the Council is also looking for possible partnership with Habitat for Humanity.

“When you start something and you see you’re doing some good, you just don’t want to stop it,” Dan said. He concluded the interview asking for men to step up and help with the program, “Ideally I’d like to have a team of five or ten guys of Knights that all they do is collect and deliver.”

The Council’s Third Year Trustee Alex Haybok is making the next donation which is a China Cabinet and has also identified a couple families in need who the Knights received furniture donations for. Alex describes the two ways in which the furniture is delivered to the families in need. One way is that a person from the Advocates of Homeless Families in Frederick picks the furniture up at Dan Wagner’s house or the Knights will rent a U-Haul and transport the furniture themselves to the families. Several weeks ago, Alex was contacted by a friend “wanting to donate a couch and two recliners in great condition”. From there Dan Wagner “was able to find someone in need through the church”. Alex went on to talk about how local veterans have also received donated furniture after the Knights partnered with Saint Peter’s Assembly. Alex concluded with a heartwarming story of a man in hospice “whose dying wish was to have a comfortable recliner chair to live the rest of his remaining days in”. So that was exactly what the Knights did.

This Council needs help not only with donations, but members that can help transfer these pieces of furniture. As any other Council, Council #13290 is still looking for men who are willing to join or members of other Councils who can lend men to help in these deliveries. If you or someone you know lives in Frederick County or the surrounding counties and has unwanted furniture there are several ways to get in contact with Council #13290. You can reach the Council’s website by Googling K of C 13290. You can contact the church by going on their website (https://www.stpeter-libertytown.org/) and selecting the contact tab. Lastly you can contact the Programs director, Mike Lee through email (mwlee1139@gmail.com).

Good enough for me: headline scorer gives this a 68