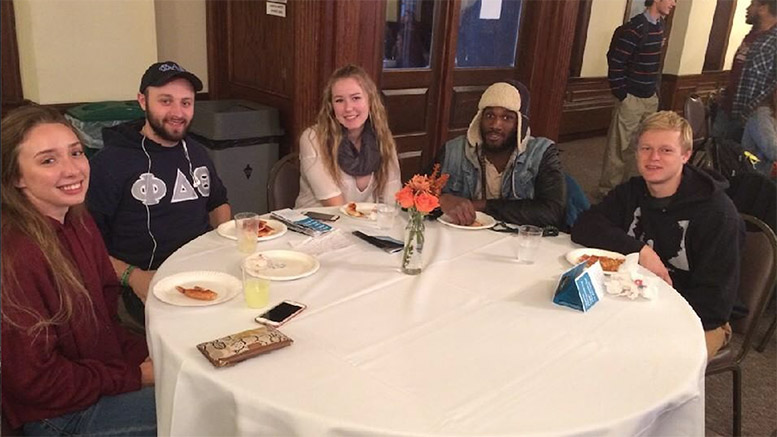 On the third Thursday of every November, calendars are marked for observation of World Philosophy Day, during which people around the globe take the day to honor and celebrate shared philosophical heritage.

“It’s a good way to get some exposure to a lot of topics that need to be brought to light,” said senior Bamasa Bailor, one of the presenters and discussion leaders. “It may be uncomfortable to talk about, but it makes our world better.”

15 years later, approximately 60 students gathered on campus to present videos, give lectures and/or engage in reflection. An emphasis of the three-hour event was placed on how philosophical concepts and contributions weave into daily life.

Lyrics inherent in Eminem’s music, the celebrity accusations of sexual assault flooding news headlines and discourse surrounding social media were just a few topics opened up for discussion on this late McDaniel afternoon.

Since 2014, Vera Jakoby, associate professor and chair of the philosophy and religious studies department, has been working closely with Elizabeth Grosz, current acting chair and assistant professor of philosophy, to coordinate the day’s festivities on campus.

Last year’s event—themed around educating millennials, and the constant technological advancements and distractions surrounding—was a hit with over 80 students. This year, as Jakoby is on sabbatical until mid-January, Grosz coordinated the event herself.

“I was pleased that the presentations incited important conversations around consent, re-thinking rigid gender roles and expectations about romantic relationships,” Grosz said. “I was happy to see students’ excitement about sharing their work on these topics with others.”

Jakoby, though not present at this event, also felt the day served an important purpose and appreciated the due attention relevant philosophical developments received. “Our discipline fosters philosophical analysis, reflection and problem-solving, as well as virtues of intellectual curiosity, courage and compassion,” said Jakoby. “Philosophy is a millennial-old tradition, but addresses challenges faced by humanity today.”

Paige West, a philosophy and political science double major, attended the event for extra credit, but came away pleased. She said she appreciated the attitude of “openness” surrounding discussions. “The majority of the presentations were focused around gender roles and how society perceives ideal men and women,” West said. “It was a great turnout.”

There were nine presentations, all created by students enrolled in the Philosophy of Love and Sex course.

In one presentation, junior Juliette Levchenko and senior Kyle Granger offered resources for students who have been victims of sexual assault and intimate partner violence.

“My favorite part was probably just sitting back and watching the other presentations,” said Levchenko, neither a philosophy major nor minor. “Everyone did their own creative thing and had their own opinions we could learn about. I felt I learned a lot more about how relevant philosophy is in our daily lives.”

“The topics started a lot of conversation,” Granger added.

Philosophy professor Thomas Falkner, proud of the “first-class” program of student scholarship, was also inspired by the conversation. “I most like the fact that it is by students, and for students,” Falkner said.  “Like my colleagues, I am happy to be an attentive listener at this event.”

From the archives: Top 10 headlines from the past 10 years