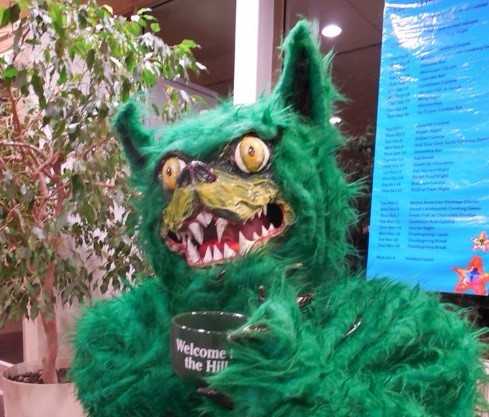 “Hot and sweaty, and not in a good way,” said Atticus Rice, describing his experience as one of the several students who make the awkward transformation into McDaniel’s Green Terror mascot for campus events. “When I get in it now, we have to staple it together each time,” Rice, a junior from Portland, Oregon, added. “It looks like it was made in a basement.”

Rice is close. In the 1990s, when McDaniel was still known as Western Maryland College, an alumni’s mother created the homemade suit. McDaniel’s current model — a furry, green, wolf-like creature missing both footpads and multiple papier-mâché teeth — shuffles around to only a few campus events. While most mascots are meant to last seven years at most, ours is over 25.

Lucky for McDaniel students, a new mascot is coming to town on Oct. 21 for the annual homecoming game, coinciding with this year’s celebration of the school’s sesquicentennial year. This Green Terror revamp will take place during the pregame, unveiling the new design to the public for the first time.

The process of creating a new mascot started roughly five years ago, as alumni have been pushing for a change.

“At first, no one on campus really knew who should be doing it,” Alexandra DeJohn, Associate Director of Student and Young Alumni Programs, said. “Our alumni are probably the most passionate bunch, so it fell into the alumni relations world.”

Heather Wilensky, Executive Director of Alumni Relations, who also oversees the Alumni Council and is a visiting member of the board of trustees, brought it to DeJohn’s attention in May of 2016.

“In the last 16 months, it’s been a major priority,” DeJohn said.

In late spring of 2017, an OrgSync survey was sent out to every faculty member, staff member, student and alumnus who provided contact information, sporting questions such as what gave the green terror its green color and what made the green terror a terror.

“Alumni are such a big part of our community, but the students are the current voice,” DeJohn said. “We wanted everyone to feel like they were a part of the process.”

From the survey answers, Alumni Council pulled the most common threads and worked with Avant Garb, a custom mascot costuming company, to formulate a representation of the ideas. Mock-ups from Avant Garb, as well as design submissions from alumni and the college community, were presented in a later Alumni Council meeting.

Ranging from a friendly teddy bear to something resembling an insect, alumni were presented with design options on which to vote. They could vote on specific aspects, such as if the Green Terror had a beard or wore pants, as well as which overall design they favored.

From that feedback, Alumni Relations staff, including Wilensky and DeJohn, worked with Avant Garb to create a final design.

“Our goal was to stay true to our most recent memories of him, but give him a new makeover that was fresh and relevant,” said DeJohn. “We are the only school with a Green Terror, and he is an embodiment of our school pride and uniqueness.”

The mascot was paid for entirely through donations from alumni, faculty, staff and students. Student Alumni Council raised money from October 2017’s Pumpkin Smash and May 2017’s Car Show.

“This was a gift from the heart of people who truly care about our mascot representing us in a more professional way, and understand the importance of the Green Terror as a significant addition to the public identity of the College,” DeJohn said.

Over the decades, McDaniel has used everything from leopard-like to monster-under-your-bed to put the abstract into a memorable mascot capable of bringing a sense of community, identity and spirit.

“I wish we had a mascot I’m not too scared to hug at events,” said Hannah Maxwell, a junior from Towson, Maryland.

“I love that our mascot is intimidating, but not that it’s outdated,” said another student, Laura DiCarlo, a junior from Bel Air, Maryland, and the philanthropy chair of Student Alumni Council. “It’s falling apart.”

While current reviews lean negative, there is optimism for the new mascot’s future. Many students would like to see a push for the new mascot to make an appearance at every home game, not just football games or admissions events.

“I think it should be more present,” Rice said. “Somehow, I do think there are students on this campus that don’t know our mascot and what it looks like. We should be out there. The mascot should be bringing us together.”