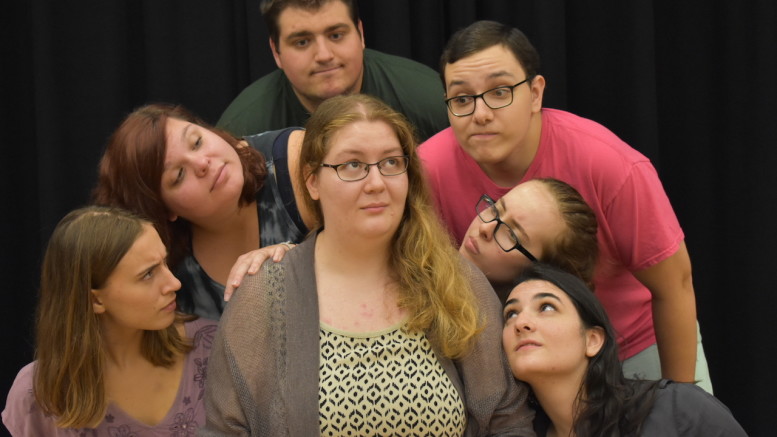 The cast of "Saints and Sisters." (Photo courtesy of Kate Stoll)

“Saints and Sisters,” a series of three one-act plays written by Gertrude Stein, opens tonight at McDaniel College. Performances through Oct. 6 in Alumni Hall begin at 7:30 p.m. Tickets are $7 for adults and $5 for senior citizens, students, military, and the McDaniel community.

Theatre faculty member Richard Sautter serves as the director for the collection of works that blended a cast of students from all years as actors, technicians, and managers. With a combined interest and dedication to the production, all involved with the show agree that “Saints and Sisters” offers a unique perspective on the performing arts.

“[“Saints and Sisters”] is a redefinition of what an audience can expect when they go to the theater,” Sautter said. “You have never seen anything like this.”

The show’s distinct performance angle is reflected by the uniqueness of Stein’s material. “Saints and Sisters” is a collection of one-act plays: “Accents in Alsace,” “Three Sisters Who are Not Sisters,” and “Saints and Singing.”

Development of a production always involves a certain process the cast goes through, building on various ideas and finding what works best to be performed.

The production process, which explores unconventional theatrical material, was reflected in the show.

“It was a really weird process, I’m not gonna lie,” cast member Ellie Davis said. “We just read through the script multiple times for about three weeks [exploring] different read throughs until Richard finally settled on a concept.”

Despite the uniqueness of the “Saints and Sisters” collection, the dedication to the production process by all involved with the shows did not go unnoticed.

“Everyone has been bringing their A-game to the production process,” Sautter said.

With Doolittle and Ball only recently arriving on the Hill this semester, the two have dived right into the production process and their work remains promising.

“To imagine that we have two designers on staff who have never worked here before and for this to be the first production they work on, they have had to hit the ground running,” Sautter said. “They both embraced the opportunity of working with an unusual piece of material and I am thrilled with the results.”

“[The cast] is absolutely the most talented group of people that I have seen,” Davis said. “Being able to spend time with the cast and getting to know them has been awesome.”

Ultimately, with the show now in performance for audiences, looking back on the production process proved to be a chance to grow as a cast, all with a common goal.

“Everyone brought something new every day,” Stage Manager Mara Flynn said. “It was a joy to see and to see [the cast] grow and to see this turn into a show, you can see the growth from the beginning of the process to the end.”

Writer of the Week: Gwendolyn Brooks