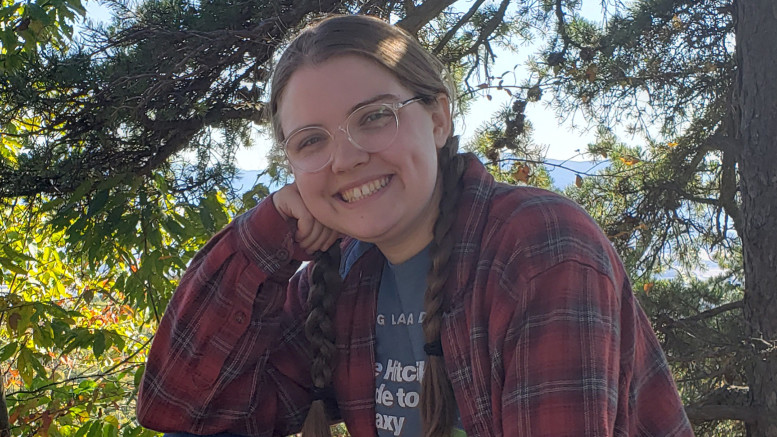 An English and environmental studies major with a biology specialization, biology minor, and involvement with the music department and Honors Program, Pogue has juggled far more than Free Press duties.

Throughout her time at McDaniel, Pogue has worked as a student ambassador at Admissions, the social media and online content engagement peer for the Office of Student Engagement, a research assistant for the Westminster Detective Library, and as an intern at the Chincoteague National Wildlife Refuge.

This busy schedule has given her the chance to meet many great people on campus.

“I think far and away the best part of this college is the people here,” said Pogue. “Just about every small liberal arts college can claim a lot of the same on-paper perks that McDaniel has: small class sizes, small student:teacher ratio, study abroad opportunities, offices to help you find internships, the whole nine yards. What makes McDaniel unique is the people who I would never have met if I went somewhere else.”

Pogue is grateful for the opportunity to take classes with so many amazing professors who have served as educators and advisors. She’s also grateful for her friends, many of which she met on the first day of orientation and still talks with every day.

Pogue attributes her great success to the help of her incredible professors, and chose to give a special shout out to a few.

“Dr. Mary of course is unparalleled, and I could never say enough good about her—she always knows everything, gives excellent advice, and working with her on the WDL over the summer was definitely a highlight of my time here,” said Pogue. “Dr. Scullion has the honor of being the professor with whom I took the most different courses, including my environmental studies capstone, and he is a constant inspiration.”

Pogue also thanks Corey Wronski-Mayersak, Ph.D., and Paul Zajac, Ph.D., whose classes she took her first semester she believes are responsible for setting her on the path to majoring in English. Four years later, they’ve served as her Honors advisor and English capstone advisor, respectively.

“And I would be remiss to not include the incomparable Tim Jenkins—without him and the jazz band, I would not have improved so much not just as a musician but as a person,” Pogue added.

Between all the work, Pogue also has many fond memories of relaxing with friends and staying up late for various game nights.

The good times did not come without some challenges, though. Her first year, Pogue believed she would be a computer science major. She enjoyed her English classes far more, but was worried that changing majors would somehow mean giving up.

“Of course, this was far from the case, and talking to my friends and mentors helped me to realize that I would be better off doing what I loved,” Pogue said. “I am very grateful for that programming class, but equally grateful that I was able to swap out that 8 a.m. discrete mathematics course before the next semester started.”

Realizing that English was her true passion was not the only growth Pogue has experienced during her time at McDaniel. She would tell herself as a first-year student, “Don’t waste your time by spending it with people who thrive on negativity, know when to say no to commitments, and value your sleep.”

Looking ahead to after graduation, Pogue is seeking a job starting in the summer or fall. In the meantime, she is looking forward to finally having some more free time for some creative projects.

Pogue shared that it has been a delight being a McDaniel student and she hopes to stay involved as an alumna for years to come. As a parting note to the McDaniel community, Pogue encourages students to participate in more events.

“There are all kinds of fun events on campus and in the community; pay attention to those arts newsletters and OSE advertisements,” Pogue said. “And above all else, support each other! Go to your friend’s sports game, your roommate’s concert, your classmate’s art show, or your co-worker’s research presentation.”