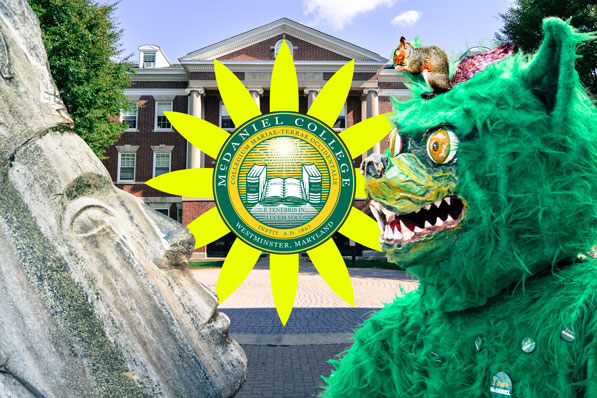 Humor is always a pleasant relief from the various stresses of college life.  Students now have a source of laughter beyond joking with their friends: a humorous Facebook page named McDaniel Facts.

According to the page’s creator, inspiration came from jokes with friends, stating, “we talked about giving a fake campus tour full of fake statistics and history.” So, in late October 2015, McDaniel Facts emerged. The creator, however, also cites inspirations such as The Onion and Clickhole.

McDaniel Facts has no other purpose other than making people laugh. However, at the same time, the page occasionally integrates commentary into its jokes. An example given by the founder is the underfunding of certain departments, like those having to do with the arts.

Statuses are both based on significant events and random humorous ideas. “I try to make jokes about what’s current e.g. holidays, campus events, current events, ect.,” wrote the creator. Statuses of this nature include, but aren’t limited to, topics like the Powerball jackpot and finals last semester. On the other hand, random ideas include statements like “the grinch is the estranged uncle of the McDaniel Green Terror,” which was shared via the McDaniel Facts Facebook page on Dec. 8.

The success of McDaniel Facts is surprising and amusing to its founder, who states, “I was shocked every time we had a spike in popularity.” Additionally, the prospect of being interviewed by the Free Press was “…flattering, if not hilarious.”

As of the writing of this article, McDaniel Facts has over 240 likes on Facebook and 128 followers on Twitter, although it has managed to have some very popular posts. The page has even attracted the attention of President Roger Casey, who has both liked and commented on certain posts. McDaniel Facts’ creator notes, “…it’s hilarious whenever the page gets any attention from President Casey or a faculty member. It’s also a bit intimidating.”

Anyone following McDaniel Facts on Twitter might have noticed the lack of activity. On this, the founder states, “I used to have a friend handling the Twitter, but he hasn’t updated it in a long time.” Essentially, Facebook is the best place to stay up to date on McDaniel Facts’ posts, though the Twitter page does have some original content.

Upon graduation, the page’s creator plans to cease posting on the page, but specifies, “…if I think I can trust someone, I might pass the page down.” Nonetheless, the quality would have to remain sufficient. Overall, McDaniel Facts gives members of the McDaniel Community a new source of laughter and continues its success into the Spring 2016 semester.

“The Vagina Monologues”: Empowering Women and Ending Violence Against Women and Girls