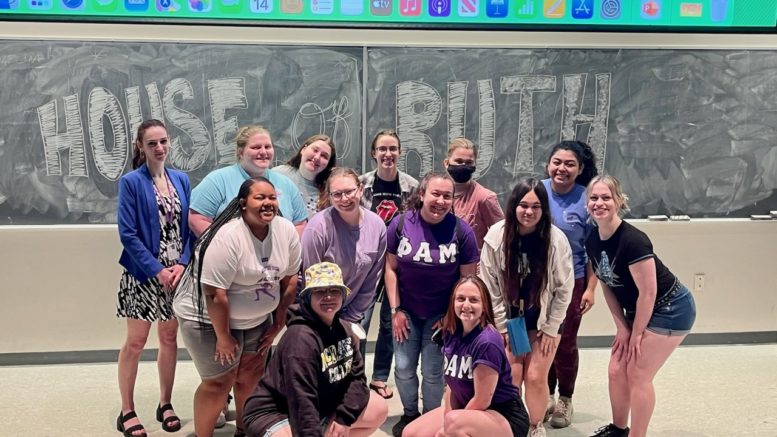 McDaniel College hosts a plethora of fraternities and sororities, but the only sorority that’s completely original to McDaniel is Phi Alpha Mu. Being the only local sorority, Phi Alph, as it’s called around campus, has deep historical ties to McDaniel. The philanthropy chair of Phi Alpha Mu, Julia Hurlock, said “If you meet a Phi Alph, you know they went here at McDaniel. All of our siblings have gone to the same school.”

Phi Alpha Mu is currently in the process of rewriting their constitution to be gender-neutral and inclusive of their non-binary members. They are the only sorority that can do this, as other Greek organizations with national headquarters wouldn’t have the power to change it.

Phi Alpha Mu was founded in 1926 and is still going strong today. This year marks their 96th year at McDaniel. Phi Alpha Mu has active “ties to this area and community,” as Hurlock said.

Phi Alpha Mu does philanthropy work for the non-profit organization, House of Ruth. House of Ruth is a shelter for women and children escaping domestic violence. It provides housing and resources, such as childcare, legal services and counseling. It was founded in 1977 and is located in Baltimore, Maryland. When asked why Phi Alpha Mu chose House of Ruth as their main philanthropy, Max Sweeney, the sorority’s secretary and Head of Recruitment, says they wanted to work with an organization that directly helps women in a local area.

In past years, Phi Alpha Mu have done feminine care and clothing drives for House of Ruth. They also do fundraising with events such as selling Halloween candy baskets.  During the most recent Recruitment Week, Phi Alph members made Valentine’s Day cards for women at House of Ruth. At the event, Julia Schnitzer, a new member of Phi Alpha Mu said, “It’s cool to know that something we’re doing is actually affecting other people. [In one of the cards,] I drew a funny cartoon that will hopefully make somebody laugh.”

During the week of April 11, Phi Alpha Mu had House of Ruth Week. During this week, they did fundraising and accepted donations on behalf of House of Ruth. They were requesting donations of household items for women being rehomed. Hurlock said, “People are being rehomed to new apartments that they’ve saved money for. They’re starting from scratch because they left the situation they were in very quickly.”

When asked what her favorite part about working with House of Ruth is, Katie McPhillips, a member of Phi Alpha Mu said, “Helping such an important and caring organization. It means so much to the women and children needing their services. Anything me and my sorority siblings can do to help is always my favorite.”

The members of Phi Alpha Mu care deeply about House of Ruth and the women they support. Some members have an emotional tie to their services and the situations they help with. Sweeney said, “The House of Ruth is something that Phi Alph is passionate about because many Phi Alph members and their friends and family have used their services in the past.”

Phi Alpha Mu is a one-of-a-kind sorority that devotes their time and effort to a cause that supports women. As a sorority, their shared passion for House of Ruth brings them together as they navigate through their college careers.