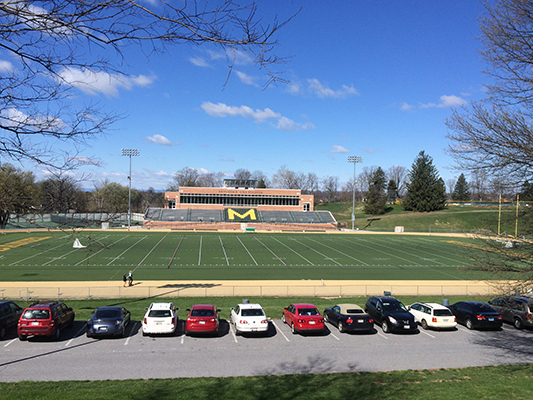 Coming off yet another disappointing season, the McDaniel football “bro squad,” as they have been dubbed, took to the field in what their one fan, Stu Padasso, called “Heroic fashion” last Saturday, beating undefeated Johns Hopkins 69-10.

The Green Terror (1-?) were led by freshman quarterback Kenny Dewitt who threw for an astonishing 1,867 yards.

Dewitt passed for 6 touchdowns and helped create three more, all handoffs to sophomore running back Willie Maykit who ran for three touchdowns.

Senior starter Ty Tannick was replaced by Dewitt early in the first quarter after the senior unexpectedly sunk into the end zone in the opening drive, leading to a Blue Jays’ safety.

Johns Hopkins (8-1) was led by tight end Lee Nover who scored the Blue Jays’ only touchdown of the game. Quarterback Jacques Strap ran for a two-point conversion late in the game.

The “epic showdown,” according to Terror head coach Faye Kinnitt, started with the Blue Jays safety just 30 seconds into the game. Down 2-0 right off the bat, the Terror brought in Dewitt who quickly turned things around for his team, passing for four touchdowns in the last 10 minutes of the first quarter.

Another two in the second quarter left the score at 42-2 in favor of McDaniel heading into halftime.

The Blue Jays came out of the locker room flying in the third, driving down the field on a quick three-play drive. Working from the Terror 15-yard line, Strap found Nover in the end zone, making the score 42-8.

Maykitt’s third touchdown of the game put the Terror up by 39 at the end of the third, the score at 49-10.

McDaniel kicked off the fourth with a missed field goal after holder Lou Briccant let the ball slip through his hands. Kicker Len DeHande saved the day, however, and fell on the ball to set up another try. Two successful field goals in the following four minutes put the Terror up 55-10.

Dewitt closed out the game with his final two touchdowns, one thrown into the end zone to tight end Mike Rotchburns, and the other which he ran in.

The 69-10 rout of the Blue Jays was quite the feat for the Terror football team, one that coach Kinnitt couldn’t have been more proud of.

“All I’ve ever wanted was to do the stuff that people do that gets the stuff that happens lots,” said Kinnitt when asked about his thoughts on his team’s gameplay on Saturday. “The boys really showed that they can do that stuff,” Kinnitt continued.

Not expected to repeat the feat anytime soon, the football team and coach Kinnitt will be honored by the school with a larger-than-life size statue depicting the game. Although the details have not been finalized, it is expected that all one fan will be sculpted in the background.

The Terror will play their next game on the road at Gettsyburg (5-3) this Saturday. Kickoff is scheduled for 7:00 p.m. in the teams’ final Centennial Conference matchup of the season.