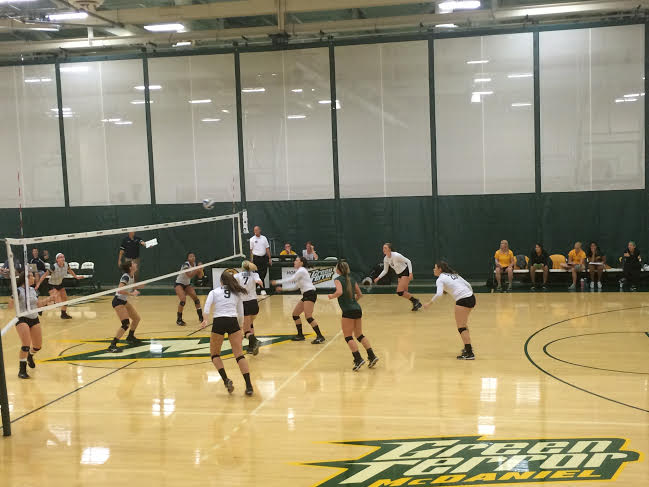 Starting the season off with only one loss, the Green Terror volleyball girls played host to the Gallaudet Bison and Pitt.-Greensburg Bobcats on Sept. 12 as the three teams faced off in a tri-match.

McDaniel (7-1) met Gallaudet (6-1) in the first match of the day where the two teams quickly became locked in a back-and-forth battle. Gallaudet pulled ahead 12-9 in the first set with the first real lead with a kill from Molly Perkins, a senior from Apple Valley, MN.

But the Green Terror fought back, eventually able to find themselves tied up at 17 apiece after a timeout called by the Bison. Their lead only grew from there, going on an 8-0 run to win the set 25-17, highlighted by the two winning kills from Allie Lugar. The freshman from Wilmington, DE would finish the match with 13 kills.

The second set started off in the same nature with the largest lead by either team equaling only three points until McDaniel once again pulled ahead for the final time. After an attack error by Lugar gave the serve, and a point, to the Bison, Lugar bounced back with a successful kill to give McDaniel a 12-10 lead. McDaniel took it from there, taking the second set by a score of 25-17 once again.

The Green Terror made sure the third set was the final set, jumping out in front of the Bison from the get-go to take it by a score of 25-15, completing their fifth sweep of the seven game season.

McDaniel freshman Taylor Bauman led the team with eight digs while Maddie Moyer topped it off with 19 assists.

After getting a rest while Gallaudet swept Pitt.-Greensburg, McDaniel took the court again for their match against the Bobcats (0-6).

The Bobcats got the first point thanks to a kill from Paige Misawic, but the Green Terror went on a 25-4 run to take the first set 25-5.

The second set saw Pitt.-Greensburg involved a little bit more, but McDaniel still won 25-15, taking a 2-0 lead on the match.

The third and final set ended 25-13 with McDaniel completing their second sweep of the day, their sixth of the year.

Lexi Corral led the Green Terror with 12 kills, and Genna Weger and Jenna Hostetler led the team with 12 digs apiece.

Although the tri-match included two sweeps for the one-loss team, head coach Jessica Wolverton said that the biggest things she emphasizes is “playing our game” and that she “felt like we could have done a better job of that,” referencing the close scores during the early part of their sets against Gallaudet.

The team will travel to Elizabethtown, Pa. this Saturday for the Blue Jay tournament, where they will face Carnegie Mellon and Eastern.