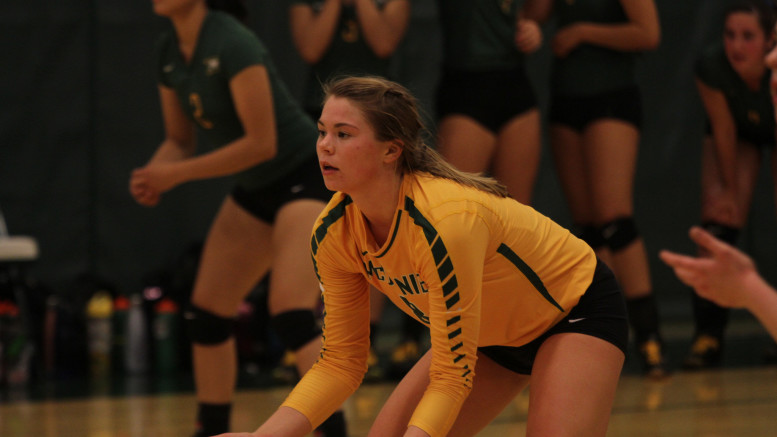 On Sept. 27, Taylor Bauman set a McDaniel volleyball record with 1,650 career digs for the volleyball team.

“It felt really cool,” the senior said. “It was really exciting, but also it was reassuring to know [that] these past four years I worked really hard and I’ve been really lucky to have amazing teammates.”

Bauman has been playing volleyball for 10 years. After trying it out with some friends in middle school, the appeal of travel teams made her want to investigate further. She made the team later that year and has loved the sport since then.

Bauman was recruited by McDaniel as a junior in high school and has had a successful volleyball career at the College. She has been the team captain for the past three years.

Under changes to Centennial Conference rules and regulations, obstacles were set in front of Bauman and the volleyball team that impacted point scoring and limited playing time.

The former rules required that a volleyball player had to be serving to score, but now points can be scored even if a team does not have the serve. Additionally, the Centennial Conference puts a restriction on how many games any student-athlete can play.

“It’s a big deal because basically, we play less games with less points,” Bauman said. “So it’s harder to get more digs now.”

Bauman’s efforts on the floor despite regulations reflected her dedication to the team’s success.

“Breaking an overall record with fewer opportunities to do so is a really big deal,” Head Volleyball Coach Jessica Wolverton explained. “There used to be more opportunities to get digs, and playing fewer points, Taylor still broke the record.  It’s truly incredible when you think about it.”

Regarding her broken record, Bauman praises her teammates and coach.

“I wouldn’t have been able to do it without them,” she said.

Bauman has been fortunate enough to compete in two postseasons and hopes to have the opportunity to do so again this year. History of competing in playoff competition has followed Bauman and has given opportunity to pick up big numbers, Wolverton said.

With graduation fast approaching in May, Bauman expressed what being a student-athlete meant to her.

“I’ve been able to enjoy being a student and an athlete,” Bauman said. “It can be really hard at other schools academically or athletically, you kind of have to pick. McDaniel does a good job of helping you balance it.”

Wolverton described Bauman as the type of student-athlete every coach wants on their roster.

“She is dedicated to doing the right thing on and off the court, loves to train and compete at the highest level, and is great at communicating with my staff and her teammates,” Wolverton said. “She sets the tone in the locker room and in the gym and has been an invaluable addition to our program these last four years.”

After graduation, Bauman hopes to become a trauma nurse and is ready to take on the challenge.

“It’s going to be stressful there,” Bauman said, “and it’s stressful on the volleyball court, so that helped me realize what I wanted to do and gain the characteristics I need to succeed.”

Clubs and Intramurals: What’s the Difference?