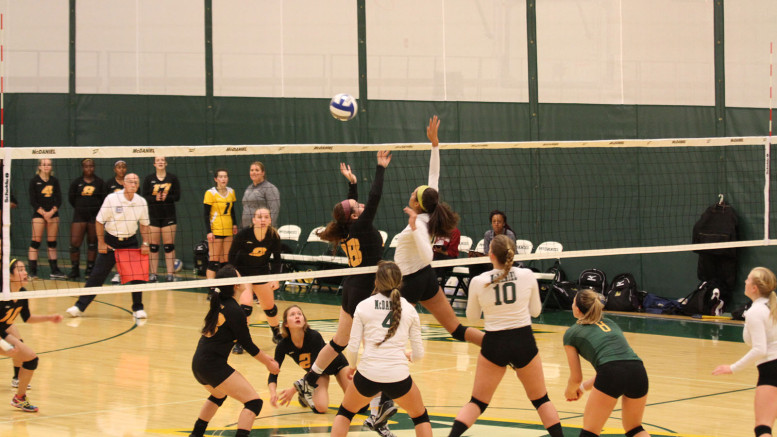 Green Terror Volleyball continued their winning ways on Saturday with a 3-0 shutout over the Bryn Mawr Owls at the Gill Center.

McDaniel (7-9, 1-1) jumped out to a 12-3 lead in the first set thanks to service errors by the Owls and great service from Genna Weger and Taylor Bauman.

Down 14-4, Bryn Mawr (2-8, 0-2) looked to make a comeback in the first after a service error by Lexi Corral. Allie Nagelski followed with serves that made the score 14-6.

McDaniel’s Maddie Moyer took over serving and helped the Terror extend their lead to 18-6.

More support from Weger and Bauman allowed McDaniel to run away with the set, 25-8.

Moyer helped the Terror start the second set with an 8-0 run, including one ace.

Bryn Mawr once again looked for a comeback down 19-5, but was unable to do more than double their score.

Continued leadership on the attack from Moyer and Corral helped lead McDaniel to the 25-11 win in the third set.

The two senior captains led the team with 12 kills each. Bauman, the sophomore captain, led on the defensive with 24 of the team’s 58 digs.

Head Coach Jessica Wolverton was pleased with her team’s play against their Conference opponents after starting the season with a 7-9 record.

“I think we have been playing some really hard opponents to start, and I think we’ve been challenged,” said Wolverton, “We haven’t been able to put everything together until this week, it’s a good time to start our upward climb, and hopefully peak through the next few weeks.’

“They really want to win, they’re ready to get it done over the next few weeks,” the coach proudly said about her team and the great leadership she sees in her captains.