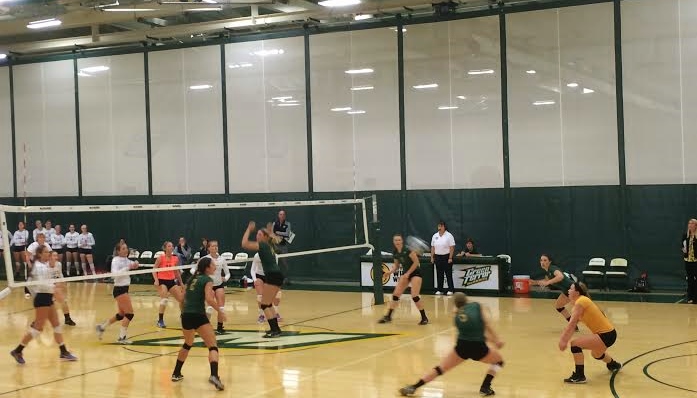 Taylor Bauman (libero) and Gena Weger (#5) look to receive the ball from Lebanon Valley in their sweep on Saturday.

After drawing their first match on Saturday against Swarthmore to a five set win, the Green Terror pulled out a 3-0 sweep, this time against the Lebanon Valley Dutchmen.

McDaniel senior Kloe Martin notched ten kills and seven digs while becoming the newest member of McDaniel’s 1,000 kill/1,000 dig club with 210 and 177 on the season, respectively.

The first set went back-and-forth. McDaniel (14-6) looked to pull ahead tied at 24, and would do so by one point thanks to the serving of Gena Weger. However a service error on the next play would tie it back up again. That would be all the scoring for the Dutchmen (14-8) as the Green Terror scored the final two points to take the set 27-25.

The start of the second showed signs of the first, yet McDaniel held a solid buffer, allowing them to take off on multiple four point runs thanks to serves from Madeline Rose and Weger. Freshman defensive star Taylor Bauman served the final two points for McDaniel as they on the second set 25-13.

The third was almost a carbon copy of the second, leading to a 25-17 Green Terror win as they completed their second match of the day.

The Green Terror were highlighted on offense not only by Martin, but by another ten kills from both Rose (120 on the season) and Teryn Rath (115 on the season).

On defense, Bauman once again highlighted with 15 digs, followed by nine from Weger. Bauman now has 305 digs on the year.