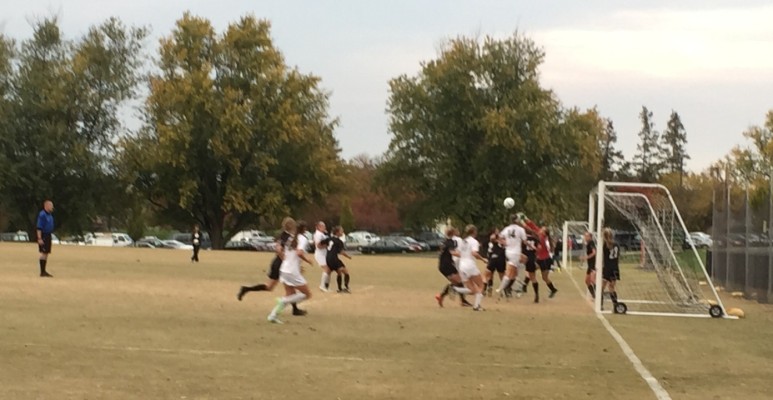 Haverford goalie Ali Weiner bats away a McDaniel corner kick in the second half of McDaniel's 3-1 victory.

McDaniel took advantage of their last home game, which was also their senior game, on Saturday against Haverford, beating the Fords 3-1.

Senior Maggie Quinn got in on all three of McDaniel’s goals, assisting with two and scoring one.

“Maggie Quinn was awesome today,” said head coach Sandy Lagana. “She’s actually scored two of the last three years against Haverford, so we kind of reminded her of that this morning. She did exactly what we needed her to.”

In the third minute, junior Christina Wroblewski passed the ball up to Quinn; she then crossed it to junior Nicole Hill, who netted the ball to put McDaniel up 1-0 for her 11th goal of the season.

That would be the score at halftime, but the Green Terror struck again within the first minute of the second half.

Quinn was fouled just outside the box, setting up a free kick on the right side. Sophomore Abby Keen took the kick, which Quinn fired into the back of the net for her seventh goal of the year.

The Fords answered with a goal of their own in the 55th minute.

McDaniel sophomore goalie Sarah McDonald blocked a shot from a free kick, which Raina Fitzpatrick kicked in to cut the Fords’ deficit in half.

The Green Terror didn’t let that goal affect the rest of the game, increasing their lead once again in the 70th minute.

Quinn stole the ball a few yards outside the Haverford goal box, took it in, and passed to freshman teammate Lindsey Farrell, who kneed it in with gusto, finalizing the 3-1 score.

“Haverford is always one of the best teams, and they work relentlessly, so a lot of it was just really playing with heart and hustling,” Lagana said on the strategy for the game. “It was really just work hard and capitalize in front of the goal.”

McDonald finished with two saves and one goal against, while Haverford goalie Ali Weiner had no saves and three goals against.

McDaniel plays again Tuesday, Oct. 27 at John’s Hopkins in a crucial conference match-up, and then again on Saturday, Oct. 31 at Washington (Md.).

They now sit second in the conference standings behind Swarthmore, who lost their non-conference game against Montclair State on Saturday, leaving McDaniel as the only undefeated team in the Centennial Conference.