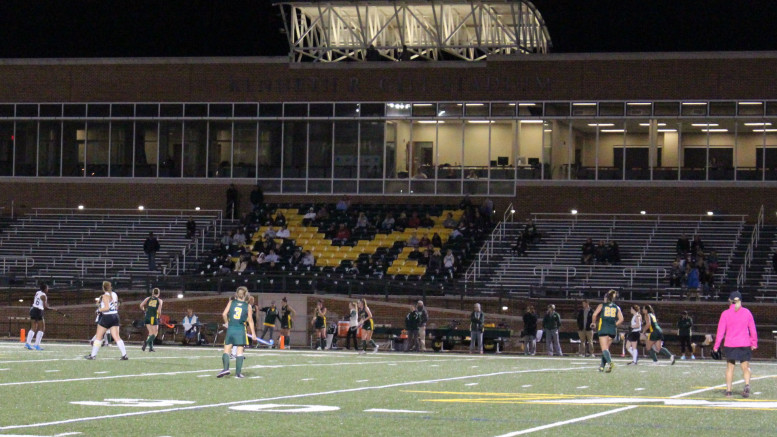 McDaniel Field Hockey is has hope for the playoffs, despite their record. Photo by Genna Weger.

With one-week left of regular season games, McDaniel Field Hockey has had a fruitful season and has the potential to make the playoffs. This is Head Coach Melissa Jones’ 11th season as the Green Terror Field Hockey coach, starting in the Fall of 2006.

This season has seen the worst numbers they have had so far, spotting a 5-11 record. However, with the win over Johns Hopkins on Tuesday night, McDaniel helped their chances of going to the playoffs. The 4-3 win over the Blue Jays was their first since 2005.  Having four of the five wins from Conference games, depending on what the other Centennial Conference teams records are by the end of this Saturday, if the Green Terror Field Hockey team pulls off a win, they have a great chance of making it to playoffs.

Coach Jones explains the team is very young but has a lots of potential. She explains how the first-years have improved a ton already and she cannot wait to see the improvements off the field in the off-season. She said the toughest part for first-years is adjusting to a faster paced game and with bigger, more physical players.

When asked about what’s so special about the team this year, Coach Jones says “The team is all together as a unit rather than being split up like in the past. This group is tougher than years passed.”

When asked about the seniors of the 2016 season, Coach Jones says “I always know they can perform, this class is so talented, always prepared and ready to go.” She know the two seniors that have been there for four years will always come in shape for the new season. “They are dependable, giving me no doubt on whether or not I can trust their readiness,” she explains.

Senior Haley VanNostrand has fallen in love with the game. Struggling with a knee injury for the past three seasons has not stopped her from going out every game and giving 110 percent effort. She explains, “My favorite memory from Green Terror Field Hockey is beating Hopkins for the first time since 2005 for my last home game of my senior year will forever be unforgettable.”

VanNostrand and Sarah Bach are the only seniors this year that have been there all for years. VanNostrand says, “Despite everything our class has been through in the past four years, I am so happy we can finish our last season together. Thank you Sarah for always working hard and showing everyone what hard work can get you.”

“I just hope that the players can overlook the numbers in their record,” Jones says. Even in the losing efforts, Green Terror Field Hockey has put up a fight. “We will be better next season and even better the next with the players that are returning and getting the recruits we need.”

McDaniel will play their last regular season game on Saturday at 1:00 p.m. at Washington (Md.).