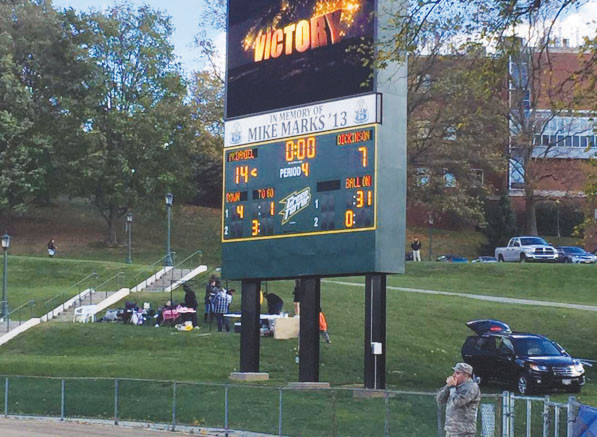 McDaniel football team is coming around for fall of 2016. The Homecoming game against Dickinson was the first for the squad since the 22-game losing streak breaking game on Sept. 24. The game was won with a final score of 14-7.

The Oct. 22 Homecoming game brought many alumni, parents and friends to the Gill Stadium to show their support. The crowded event paved the way for victory and brought a whole new level of confidence to the players.

The football team played a stressful, but exciting game against the Dickinson College Red Devils, winning in the final minutes of the game, putting supporters on the edge of their seats.

Senior linebacker Claude Richardson said, “It was a great game defensively and offensively, we probably played one of the most competitive games.”

This win, the team’s second this season, is exciting news for the football team and all who support McDaniel, especially the seniors, as it is their last year to show their college support and enjoy participating in these college football games with their friends and team-members.

Senior linebacker Roberto Molina added “It was exciting to be in the company of alumni to watch our football team win a Homecoming football game, [something] which has not been done in a couple of years.”

The Homecoming game was full of people who were cheering, supporting, and sending good luck to the football team in their battle for success. Dozens of families tailgated and barbecued hot dogs, hamburgers, chicken wings, and tons of other fun snacks to share to ensure a fun, afternoon showing support and enjoying the sunny fall day.

After the game, Richardson added, “Nervous? No, I was more excited. It was Homecoming you get to play in front of a big crowd, what’s not to be excited about?,” when asked how he felt about the number of people attending the game.

Several families of students, players, and those who graduated brought their pets to have them around the hill for everyone to meet and greet, which helped to raise the spirit of everyone! All of this support helped to boost confidence, determination, and life in the players as well as all those watching.

Senior players were proud and happy after their second success, especially with friends, teachers, and alumni all eagerly watching from the hill. The spirit, love, and support that surrounded the field and team during this Homecoming, and that hovered within the air at this game will hopefully continue and come back for the rest of the season. It may bring more wins for McDaniel.