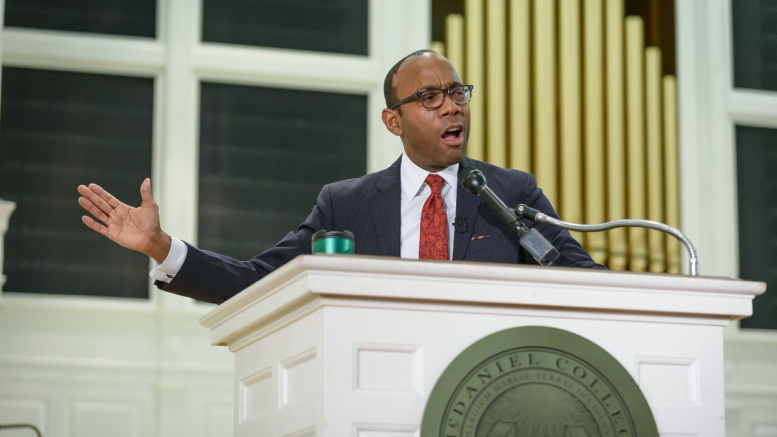 Photo courtesy of McDaniel College Office of Communications and Marketing.

On Oct. 24, the President and CEO of the NAACP, Cornell William Brooks, gave a riveting talk at McDaniel that tackled many issues we are seeing in today’s society, from racial inequality, to economic and social inequality, to voter suppression.

“Do not tell me what students and young people can’t do,” he claimed. Throughout his speech, Brooks pushed for as inter-racial, inter-faith, inter-generational, all-encompassing movement for justice, a movement that starts with students. It was students that helped the Civil Rights Act of 1964 get passed. It was students that started the Black Lives Matter movement. Today people face more and more issues of social justice, issues that are rooted in institutionalized racism.

According to Brooks, “If black lives don’t matter, then no lives matter.”

This topic moved many members of the audience. Senior Brie Sutton explained, “He gave me chills while he was giving his speech. I believe that it is so important as a black woman at a predominantly white school to hear what he was saying: that black lives inherently matter because all lives matter.”

He explained to his audience that they, as students, stand up for justice; that they stand up for human integrity. Junior Maggy Self agreed with Brooks and noted, “The younger generation has a lot of problems getting motivated to actually get registered and vote, so I like how he was trying to inspire us to get up and exercise the right that people have died for. He made it seem like if we all rose up and voted or just rose up in general, we would actually be able to go up against the politicians and actually win and create change.”

The NAACP president emphasized the importance of voting in his speech and said,“The right to vote is a civic sacrament.” Brooks explained that it was students that helped pass the “Ban the Box” law in New Jersey. This law is meant to create a second chance for those who never had a first. These people are those that are profiled, those that are shot at when they pose no danger, those that have been ignored by the government.

Brooks also mentioned a recent Supreme Court decision called Shelby v. Holder, in which Supreme Court justices gutted the Voting Rights Act. Through this decision, states have been able to pass legislation making voting much more difficult. One state that he mentioned was Texas, where a concealed weapons ID is sufficient identification to vote, but a student ID from university is not. “In other words, a concealed weapon permit allows you to vote, but your McDaniel ID does not allow you to vote in Texas,” he stated.

Sutton said that Brooks’ speech left her feeling empowered as a social justice activist. “Dr. Brooks made it clear that in this moment, in this generation we have power that is unprecedented. We can truly change things with the Black Lives Matter Movement. To me, that was very important: that black young men and women need to feel empowered to make change.”