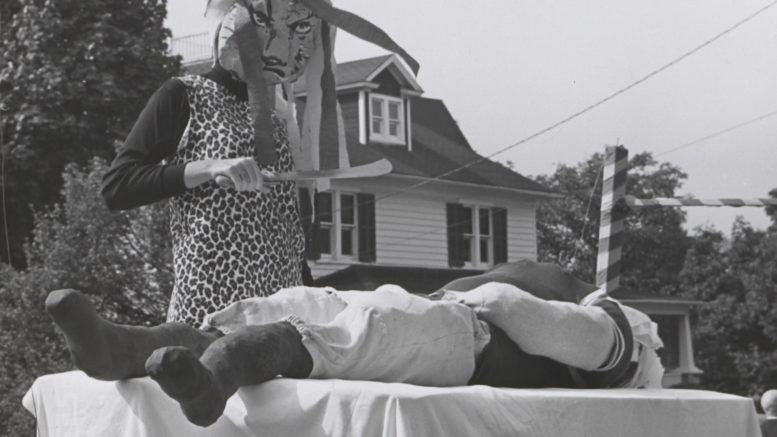 1960s era Green Terror. Where is he now when we need him most? (Photo courtesy of the McDaniel College Archives)

The Green Terror wears a mask. His identity is a secret. And his abs are so, so beautiful. You know who else wears a mask, hides their identity, and has amazing abs?

Spider-Man. Batman. The Flash. That one dude from V for Vendetta (great flick).

So, what makes the Green Terror so different from them, that he spends his time lollygagging around Admitted Students Day, mysteriously not speaking a word to anyone? Does he think that makes him hotter? It doesn’t!

Crime is rampant across Westminster and McDaniel campus, with students sneaking into bars and vaping in their rooms, with RA’s (our schools most trusted officials) sleeping with their residents and smoking weed. I want to see the Green Terror kicking ass in Down Under and absolutely wrecking the shit out of any freshman who weasels their way into any bar in Westminster.

The Green Terror needs to stand up for this school and bust down any party happening on Pennsylvania Ave. Enough “bangers,” enough “keg stands.” Campus Safety has to work hard on putting out garbage fires and playing beer pong, so who is here to really keep McDaniel safe?

Who is going to protect freshman girls from trying to date senior football players?

Who is going to stop that one floor in Rouzer and Whiteford from smelling like weed all the time?

Who is going to keep the public from filling up their water bottles at the pub after hours?

Who is going to tell freshman that the friends they make in their first semester will all hate each other in a year?

Instead, the Terror is wasting his time waddling around at admissions events and some sports games, showing off his hot, sexy abs and muscles, with no fear of what happens at our fine school after hours.

This is a public call for the Green Terror to do more. To put his claws forward and his ass in the air, ready to tackle the dangers that haunt our campus. We need a hero at McDaniel, an icon for the people. We need the Terror to take a stand against the slime that infects our community.

For more on the Green Terror, tackle him next time you see him.