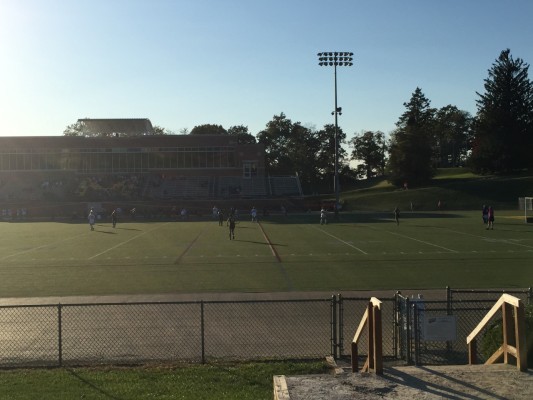 The women’s field hockey team faced off with Gettysburg on Tuesday and fell 2-0.

For the first half of the game, the Green Terror were mostly playing defense against the Bullets, who made 11 shots on goal.

Samantha Wright scored for the Bullets 18 minutes into the first half, giving them the lead 1-0. McDaniel goalie Christina Gooding had four saves in the first half.

In the second half of the game, the Green Terror again were playing a mostly defensive game as the Bullets had 7 penalty corners that they executed, compared to the Terror’s one penalty corner.

Gettysburg’s Philippa Lumsden scored in the last minute of the game off of a penalty corners, finalizing the 2-0 score. McDaniel did have three shots on goal, but Gettysburg edged them out with five shots on goal in the half.

Both the Terror and the Bullets received two yellow cards during this half.

The Bullets had 16 shots on goal for the game over the Terror’s nine. McDaniel had six saves made by Gooding, and Gettysburg had five saves.

The Bullets had 13 penalty corners over the Terror’s four for the entire game.

The Green Terror will play this Saturday at home at 1 p.m. against Haverford.